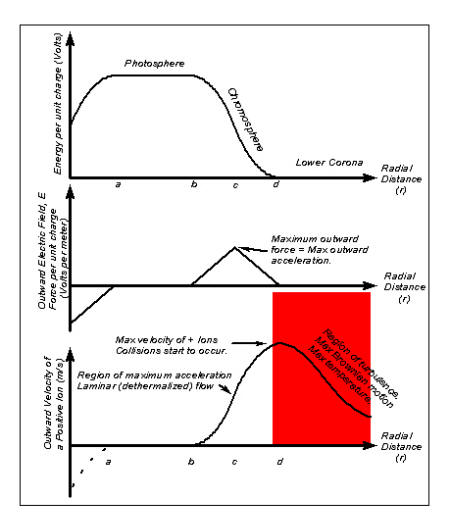 The chaos of Brownian motion produces the high temperature we see in the solar corona.

Of all the ideas offered up as being an explanation of the extreme temperature (more than 2 million Kelvin) measured in the lower corona of our Sun, the simplest is that electrically accelerated high velocity positive ions are colliding with relatively static ions and neutral atoms in that location.

The electrical properties of the Photosphere/Chromosphere/Lower corona region of the Sun’s visible boundary is dominated by a double layer (DL) of electrical charge. This double charge layer is shown in the bottom plot in the main figure of the May 11, 2010, Picture of the Day. The top and middle plots in that figure are reproduced in the image above.

Positive ions in the photospheric plasma do not experience external electrostatic forces when they are within the photosphere (region a to b in the figures). Only diffusion motion (response to a concentration gradient) and random thermal (Brownian) movement occurs. Temperature is simply the measurement of the violence of those random movements. The photosphere is where the Sun’s low ~5800 K surface temperature is measured.

The top electrical energy (voltage) plot shows that positive ions have their maximum electrical potential energy when they are in the photospheric plasma. However, their mechanical (kinetic) energy (temperature) is relatively low. At a point just to the left of the right hand edge of the photospheric energy plateau (point b), any random movement toward the right (radially outward) that carries a +ion even slightly over the edge will result in its being swept away, down the energy hill, toward the right.

The middle plot in the figure above shows the strength of the E-field (voltage gradient) consistent with this spatial voltage distribution. This electric field is the force per unit positive charge applied to any +ions in this region. In region b to d this force accelerates each such +ion in the outward direction. The acceleration produced by this E-field is a maximum at point c, and the +ions’ outward velocities reach a maximum value somewhere near point d.

As these positive ions accelerate down the steep potential energy drop, they exchange the high (electrical) potential energy they had in the photosphere into kinetic energy – they gain extremely high outward radial velocity and lose side-to-side random motion. Thus they become “de-thermalized.” This is because in this region of high radial acceleration, the movement of these ions becomes extremely organized (parallel). Their temperature, which is just a measure of their random motion, drops to a minimum.

When these rapidly traveling +ions pass beyond the reach of the intense outwardly directed E-field force that has been accelerating them, they have reached the bottom of the hill and are moving much faster than when they were at the top. Because of their high kinetic energy, any collisions they have at this point with other ions or neutral atoms are violent. This creates high-amplitude random motions, thereby “re-thermalizing” all ions and atoms in this region (shown in red) to a much higher temperature. The sparkling x-ray emissions that have been observed here in the lower corona are undoubtedly due to these collisions.

Ions just above (in the diagram, to the right of) point d are reported to be at temperatures of one to two million K. Nothing else but exactly this kind of result could be expected from the Electric Sun model.

The re-thermalization takes place in a region analogous to the turbulent white water that boils up at the bottom of a smooth laminar water slide. In the fusion model no such (water slide) phenomenon exists – and therefore neither does any simple explanation of the observed temperature discontinuity.

Notice that no mention has been made in this process of magnetic reconnection or, in fact, of any magnetic mechanism whatsoever. Strictly electric forces that occur within the double charge layer above the Sun’s surface cause the observed phenomenon.