Home Picture of the Day The Worldwide Web—A Common Thread 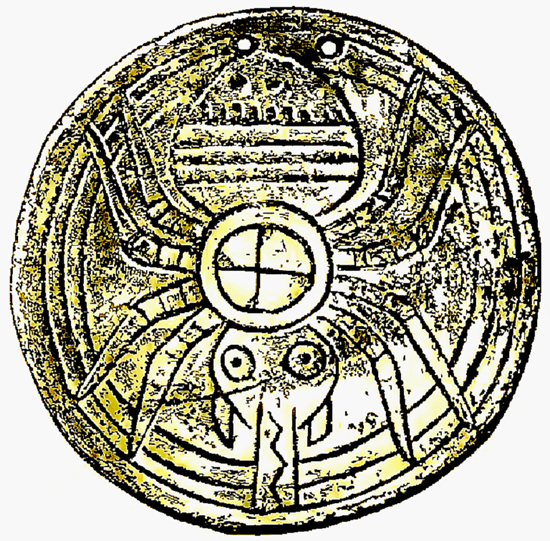 Shell gorgets were found in mounds of the prehistoric Mississippian culture, often still reposing on the chest of the wearer.

The spider is a recurrent theme on gorgets in mounds in Illinois, Missouri and Tennessee. The early anthropologist William Henry Holmes (1846-1933) observed that the above specimen is “drawn with considerable fidelity to nature and covers nearly the entire disk, the legs, mandibles, and abdomen reaching to the outer marginal line.” Its thorax is “placed in the center of the disk, and is represented by a circle; within this a cross has been engraved”. Apparently, the spider, the cross – which is “identical with forms found upon many other objects” – and other variable elements such as concentric rings and a ring of 24 triangular notches were “not a mere fanciful invention, but had some symbolic meaning.”

An initial hint is provided by the Cherokee myth of Kanane´ski Amai´yěhi (“Water Spider”), who “spun a thread from her body and wove it into a tusti bowl which she fastened on her back” and used to retrieve the first fire from “a hollow sycamore tree which grew on an island”. But this explanation hangs by a thread: spiders do not weave bowls or procure fire for the benefit of others. The myth must be part of a wider web of spider mythology which needs to be addressed as a whole.

Creation myths around the world feature an arachnid demiurge or cosmic spider webs. The natives of Kiribati (Micronesia) named the creator Na Areau te Moa-ni-bai (‘Sir Spider the First-of-Things’), who “sat alone in space as ‘a cloud that floats in nothingness’.” On Nauru, his cognate Areop eṅap was also identified as ‘the old spider’. A third Micronesian group, of the Ralik Chain of the Marshall Islands, relayed that the world with the plants and animals was created before a sea-gull ‘formed the dome of the sky while a spider weaves its web.’ Chiefs of the Pima (Arizona) “say that the earth was made by a certain Chiowotmahke, that is to say Earth-prophet. It appeared in the beginning like a spider’s web, stretching far and fragile across the nothingness that was.” And the Karen (Myanmar) alleged: “There was a spider in the sky, and he was able to pass to and fro between heaven and earth.”

Involvement of a form of axis mundi in such traditions points to their original nature. The Cherokee tale receives a different spin when the classic description of the cosmic axis as a primaeval repository of light and fire is recognised in the tree from which “Water Spider” collected the fire. The Ashanti (Ghana) likewise pictured Ananse Kokrokō (“the Great Spider”) with a receptacle on its back, relating that he once “collected all the wisdom of the world and shut it up in a gourd, and was climbing up a tree to deposit it on the top. He got into difficulties, however, before he reached half-way up, as he had tied the gourd on to his belly, and it hindered him from climbing properly. … It broke, and the wisdom it contained became scattered …”

Many a yarn was spun around the conception that the axis mundi was itself a spider’s thread – a metaphor in the same category as ‘ropes’, ‘snares’, ‘strands of hair’ and the like – along which mythical beings used to pass. According to the Chukchi (northeastern Siberia), “the supreme being in the upper world … lets down by means of a strong rope the human visitor and his wife, after supplying them with provisions. Sometimes his rope is only a spider’s thread, but is capable of sustaining twenty reindeer-loads without snapping.” The Ojibway (straddling the borders of Canada and the United States of America) supposed their ancestors to have descended from the moon on a web woven by a giant spider. The Yorùbá (Nigeria) told that …

“… in the beginning the world was all marshy and watery, a waste place. Above it was the sky where Ol-orun, the Owner of the Sky, lived with other divinities. The gods came down sometimes to play in the marshy waste, coming down spider’s webs which hung across great gaps like fairy bridges.”

In a story from the Blackfeet (southern Alberta and northern Montana), Spider Man “spun the web, upon which Soatsaki was let down from the sky”, “down through the hole to the earth.” Among the Aztec (Mexico), some said that ‘Tezcatlipoca … had descended from the sky sliding down a rope he had made of spider web’. The tribes of the Māori (New Zealand) passed on several versions of Ta-whaki’s ascent to heaven, of which that of the Ngāti Hau (Wanganui, North Island) is as follows:

“Ta-whaki at one period lived on earth, and was in appearance like a man. … He went up to the top of a mountain and sat down, where he put off his earthly garments and clothed himself in lightning. … He now climbed into a ti-tree (Cordyline), from the top of which a spider’s web reached up to heaven. Up this he ascended, but, having gone some distance, his female ancestor chanted her incantations to herself. The web broke, and he fell back to the earth. He made a second attempt, but failed. On the third he gained the sky.”

Variants of the myth underline the ten ‘heavens’ through which Ta-whaki passed in succession along the cord. Meanwhile, the Chorote (southern Gran Chaco) narrate how “Sén, the hummingbird” and other heroes in avian form wished to ascend to heaven, but found the chain of arrows they had produced inadequate:

“Then they sent Siwálak, the spider, up on it. … Siwálak began to spin a web and reached the sky. Then a rope appeared that Siwálak made up above. When the rope was finished, the birds began to jump, grabbing the rope to go up to heaven. The last one to climb up was Sén …”

A variant of this myth involved a “ladder”, which “was of chaguar fiber and in the form of a spider’s web, but elongated rather than round.” Furthermore, the Rotse (western Zambia) claimed that the principal deity originally “lived here below among men”, but, as he was stalked, “at the order of God the spider spun a thread which reached right up to the sky, and God and his family climbed up there and have stayed above ever since.” In the mythology of the Yao (south of Lake Malawi), Mulungu (‘God’) “was staying down here, before he went away to heaven”, but was offended when the first pair of humans destroyed his animals:

“Now the Chameleon ran away, and Mlungu [sic! MAS] ran away. The Chameleon ran for a tree. Mlungu was on the ground, and he said, ‘I cannot climb a tree’. Then Mlungu set off and went to call the spider. The spider went on high and returned again, and said, ‘I have gone on high nicely’, and he said, ‘you now, Mlungu, go on high’. Mlungu then went with the spider on high.”

Mindful not to lose the thread, one finally notes that spiders and their webs feature in myths regarding the downfall or the doomed construction of the world axis. For example, the Louyi (Upper Zambesi river) viewed Nyambé as the sun who used to live on Earth: ‘When Nyambé returned to the sky, he mounted on a spider web.’ The remainder of the story epitomises the familiar motifs of the axis mundi formed of concatenated units and tragically disintegrating:

‘(The people) said: Let’s make masts to arrive in the sky. They planted (long) poles, they added (other) poles attached to these (to each other). When they were (arrived) far (by mounting along these poles), the poles collapsed.’

According to the Mohawk (originally New York State), Takwă·ă·´sa·r (‘Spider’) played a decisive part in the levelling of the cosmic tree which used to hold the sun in place:

“So then Sapling said: ‘Thou, Beaver, do thou cut down the tree; and thou, Spider, shalt climb the tree, and at the top of the tree thou shalt fasten thy cord. Then thou shalt descend, hanging by thy cord, until thou reachest the ground.’ … All this, then, came to pass. Beaver, of course, worked there, biting out pieces from the tree; and Spider, for his part, climbed to the tree top, and having reached the top, he then, verily, fastened his cord about it. Thereupon he let himself down, and again alighted on the earth. So then, when there was, of course, little to cut, and the prospect was encouraging that it would be possible to fell the tree, then Spider pulled on the cord. Then, in fact, the tree toppled over.”

Finally, the Huaorani (Ecuadorian Amazonia) transmitted a similar account in which Spider and Squirrel razed the bobehuè or giant Ceiba (Ceiba pentandra), which was the first object to exist and allegedly contained all forms of life at the time: “Squirrel and Spider decided to take action … they climbed up to the very top of the tree … Spider wove a tight and intricate web … But the manoeuvre went wrong. Instead of cutting the web off the branch, Squirrel’s teeth incised the vine that linked up the tree to the sky. While the vine sprang up, with Squirrel still biting on its end, the giant tree crashed onto the ground, westward.”

Many have sought to explain creation myths in terms of meaningless fantasy, the folly of primitive minds or hyperbolic symbolism derived from inner workings of the human mind or to express nature’s most mundane manifestations. Clearing the cobwebs of such inadequate theories, the various strands of myth identified above find a compelling solution in geomagnetism.

The earth’s magnetosphere shields it from dangerous radiation and particles. At times when the field is impaired, such as geomagnetic reversals and excursions, incoming charged particles can penetrate deeper and more broadly than under quiescent conditions. Arguably, the aurora then transforms into a global phenomenon of greater intensity than usual. The shape of the aurora is at all times determined by the delicate structure of the geomagnetic field. Though field lines are just a conceptual tool to visualise this fine system, the inflowing plasma does organise itself into the filaments seen in auroral rays, arcs, coronas and other features. If such events occurred within human memory, traditions of gossamer networks in the atmosphere, of which the celebrated axis mundi formed part and parcel, could testify to the auroral illumination of stringy patterns in an enfeebled geomagnetic field.

Nor does the hypothesis leave the spider stranded – the intense aurora is expected to form plasmoids not unlike ball lightning, which eventually detach themselves from the columns. The Spanish researchers Rañada, Soler & Trueba noted: “In some cases, filaments are observed trailing a ball; they must be streamers which break open and follow behind …” To naïve observers lost for words, the filaments could well have resembled the legs and pedipalps of a spider. The spider’s intimate association with the ‘sun’, the delivery of ‘fire’ or an outfit of ‘lightning’ is easily seen in the same auroral light.

With thanks to Robert J. Johnson for the reference to Rañada, Soler & Trueba.