Home Picture of the Day Circinus: an X-Ray Binary? 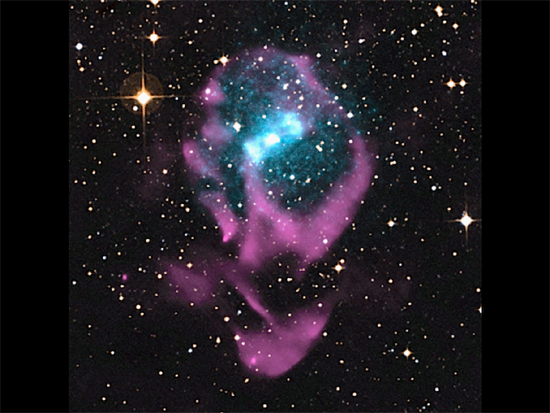 Neutron stars are not viable explanations for energetic objects.

Recently, the Chandra observatory detected what they are calling the “youngest” X-ray binary star radiating massive amounts of energy into space. The radiation is in X-ray wavelengths, which non-electrical theories can only interpret as being generated by matter that is extremely hot and moving very fast. So, an extraordinary means for how that much energy could be produced in a relatively small space must be proposed. NASA and University of Wisconsin researchers wrote:

“Systems known as ‘X-ray binaries’ are some of the brightest X-ray sources in the sky. They consist of either an ultra-dense star packed with neutrons—a.k.a., a ‘neutron star’—or a black hole that is paired with a normal star like the sun. As these two objects orbit one another, the neutron star or black hole pulls material from the companion star onto it.“

Even though scientists have little understanding of what is going on in the case of Circinus X-1, they rely on gravity-only viewpoints for explanation. In another image, the emissions are shown in red, green and blue, representing low, medium and high energy X-rays. The radio lobes are thought to be the result of precession in the star, causing a wobble that creates the two jets as it oscillates. The extreme density of the neutron star is thought by astronomers to influence an intense gravitational field around it, causing waves in the ejected material.

In standard astrophysical models, black holes are supposed to be the only objects in space that can compress matter to the point where it would be accelerated to relativistic speeds and release high-frequency electromagnetic radiation. The fast-moving photons would be expelled from the black hole’s poles and glow brightly as gamma ray or X-ray light.

“One of the basic rules of nuclear chemistry is the ‘zone of stability’. This is the observation that if we add neutrons to the nucleus of any atom, we need to add an almost proportional number of protons (and their accompanying electrons) to maintain a stable nucleus.”

Plotting the number of neutrons against the number of protons in the nuclei of all elements demonstrates that the ratio is about one-to-one for light elements and one point five-to-one for the heavy ones. An atomic nucleus outside the range will spontaneously decay so that it reaches a stable configuration and remains in equilibrium. If there are too few neutrons, an atom will emit protons in order to stabilize and vice-versa. A nucleus composed of neutrons alone would be completely unstable.

In the Electric Star theory, no exotic objects like neutron stars, and no forces like concentrated gravity from super-compacted objects are necessary. Electricity is more than able to create the phenomena exhibited by Circinus X-1. The two “lobes of the jet” can be viewed more simply as a glowing plasma cone seen in profile (the Red Square nebula, for example): the configuration is a plasma z-pinch, also observed in supernova remnants and planetary nebulae.

Expulsion disks are also common in such energetic systems. It is an assumption to call them “accretion” disks. Plasma discharge events, or electric arcs, are commonly known to generate high-energy light. The more electrical current supplied to an arc, the higher the frequency of light will be emitted. Supply enough power and X-rays, gamma rays, or extreme ultraviolet light are generated.

Electricity is the force powering the stars—the more electricity that flows in to a star, the greater the effect on its output, causing powerful bursts of energy that are detected by instruments, like Chandra. The stars are anodes in a huge galactic circuit, so the standard models for their behavior will always fail to adequately explain observations.