Home Picture of the Day Can Kangaroos Swim? The Wallace Line

Can Kangaroos Swim? The Wallace Line 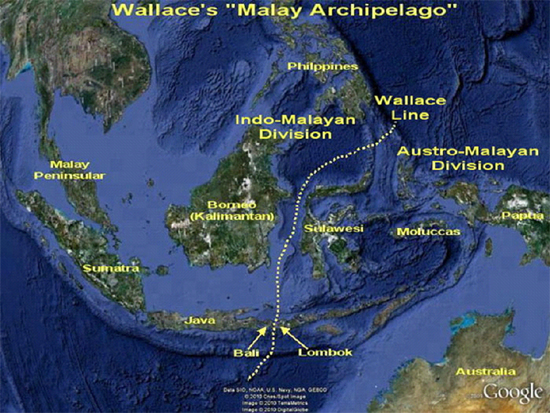 Between Bali and its neighbouring island, Lombok, is a slim ten mile sea channel.

The channel is the start of the thousands-mile-long Wallace line. It is not only a dividing geological etching beneath the sea, it is also a biological division. On one side of the Line roam bouncing kangaroos and platypus. On the other, man eating tigers. To the south is Australia—to the north are the Philippines and India.

Remarkably, the Line includes both plant and animal species. Sulphur crested cockatoo are on one side of the Wallace Line, and Indonesian finches live just across the sea channel. Fire-prone gum trees are found on one side and exotic tropical rain forest teak and ebony are on the other. Even beneath the sea, in an area separated by a mere ten miles, there is an incredible separation of fish life staring you in the face. From Australasia to the Antarctic lies a unique zone of flora and fauna.

Sir Alfred Wallace was the first to stumble upon this imponderable confrontation of alienated species. Wallace and Darwin were co-authors of the radical “Natural Selection” evolution theory of the Victorian era. The 1850s was the “Age of Reason”. They twisted their theory to try and encompass the bizarre Wallace line contradiction. Explanations hovered around deep seas too hard to navigate by swimming kangaroos, to isolation of one species by an earlier disappearing land bridge. Both were Darwinian fantasies. However, Darwin’s ideology was eventually accepted by consensus and its powerful dogma crucified any dissenters.

Speciation is an incredible area of scientific dispute. It appears that Darwin’s “natural selection” theory, with its reliance on millions of years to explain species change, is well outdated by modern scientific scenarios and facts. Nevertheless, the natural selection rational is adhered to in endless scientific papers as a “time driven” paradigm.

Are there better explanations for the formation of species? The Wallace line’s geological boundary suggests a powerful clue. It may clarify why there are radically opposing species of flora and fauna on either side of the Wallace line. It is an offshoot of the Pacific “Ring of Fire”, where volcanoes, earthquakes and tsunamis govern the environment. Could these essentially electromagnetic phenomena provide the real tool to the Australasian speciation?

The Electric Universe sees much of Earth’s geological formations as the result of electric etching micro-mimicked in plasma laboratories. Both dendritic formations and sharply carved scarps are the result of different intensities of exploding plasma instabilities. Etching can be on a huge scale. One such possible scenario is shown in the etching of the Martian landscape in the Thunderbolts Project film, Mars—the Great Unsolved Mystery.

In the case of the Wallace line, it runs along a boundary marked by steep underwater sharp-faced cliffs. If electric machining moved along such a boundary, then the resulting discharges may well of affected the chromosomes of the various life forms over a wide area. This electromagnetic arc may have stimulated an adaptive species readjustment called polyploidy. Could a continent wide plasma discharge drive the formation of unique species over a wide area?

My hypothesis is that Earth has been subjected to continent wide insults. Accompanying major cosmic plasma discharge events are a litany of broad spectrum bombardments, from physical particles to the full spectrum of electromagnetic wavelengths: radio waves, microwaves, ultraviolet, visible, infrared, x-rays and gamma rays. Beta waves (electrons), alpha waves (helium nuclei) and other more complex nuclei are also present. These can be of high or low energy. They all have different effects on the basic reproductive building block of nature, the DNA-packed chromosome. They are potent encouragers of polyploidy adaption.

It seems that a forcefield seizes the chromosomes, causing them to harmonize with the new paradigm. Then numerous species immediately adapt to the new enchantment of the invasive electromagnetic spectrum. Smaller, bigger, marsupial, mammal: all the various existant species recognize the new optimal functionality and activate using polyploidy to adapt. Not millions of years as theorized by “natural selections”. No. Immediate speciation.

Most of this electromagnetic arsenal has been shown to dramatically effect speciation. But each with significantly different results. Mutations can be self-limiting because they are often highly divergent and proliferative and usually asexual. That is without the need for male plus female. This is very common in the plant and fish world but harder to reproduce in the animal species. This process is the intelligent adaptive world of polyploidy.

Most living organisms are locked into a two chromosome reproductive process (diploid). But polyploidy allows the chromosomes to form new species instantaneously. Thus, a specimen under extreme provocation forms new species immediately. This is not natural selection. This is a curiously intelligent adaption process which allows for the normal process of reproduction to ‘read’ the new electromagnetic harmonic. This is instant speciation.

Plants and a variety of marine creatures (salmon, mollusks etc.) frequently demonstrate polyploidy under provocation. One instance is the plant world living in the toxic chemical world of serpentine rock habitat. The plants break out of the diploidy normality and react by producing a number of polyploidy species. Similarly both extreme heat and the chemical colchicine are used by humans to induce polyploidy and hence totally new species.

Neutrons, a normal byproduct of intense plasma discharges, seem to be the safest at producing polyploidy in the animal kingdom. Although observed polyploidy events seem to have lower chromosome survival rates, mammals do use them routinely in specialist cells such as the liver. Is it beyond the pale that kangaroos as well as plants and fish were sent off on a genetic leap under chaotic conditions to adapt to a totally new provocation? Could Wallace’s line be the boundary of a huge species altering plasma event? Could plasma discharge be the tool of speciation?

What evidence do we have for this innate action of chromosomes to switch to polyploidy? In the plant, insect and fish world we have many examples. In the world of mammals, our human world, it is in dispute. But in recent history no catastrophic event has been witnessed that could stimulate this process. In extreme circumstances, could mammals too have an inbuilt emergency adaption? Is there such evidence? Probably. As Harvard paleontologist Stephen Gould notes: “Without exception there has never been a new species without a preceding mass extinction. Fossil records demonstrate that a species remains unchanged for millions of years before abruptly disappearing. Gradualism is not a fact of nature. Most new species appear with a bang. Nature does take leaps”

Wallace himself when contemplating the world’s mass extinctions concluded: “There must have been some physical cause for this great change; and it must have been a cause capable of acting almost simultaneously over large portions of the earth’s surface.” Such a continent was Australasia.

Can Kangaroos Swim? The Wallace Line.