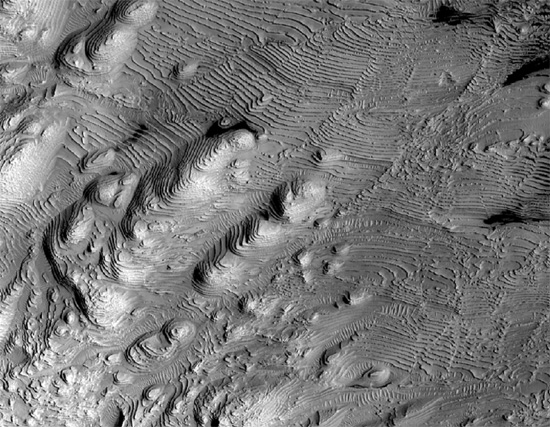 Structures on Mars that resemble Earth’s hydrothermal vents or eroded mounds have sparked renewed interest in water flowing over the Red Planet.

Mounds on Mars are thought to be the remains of ancient hydrothermal vents because they have a similar appearance to fossilized “mound springs” in the Australian Outback, so researchers theorize that both structures could be of similar origin.

Hydrothermal vents were a startling discovery for scientists when the first deep water exploration of the mid-ocean ridge was conducted. The surprise was not that the vents were spewing black, mineral-rich water at over 300 Celsius, but that there were colonies of living organisms surrounding them, thriving in a frigid environment a thousand meters or more beneath the sea.

Since conventional geological theories suggest that the ocean bottoms have changed places with the high places on Earth over millions of years, the formations that were once in the deep are now located on mountain tops or in torrid deserts. Formations like the Australian mounds are thought to be the remains of hydrothermal vents that were once active on the bottom of an ancient sea.

A few of the mound springs in Australia retain connections to underground water sources and continue to flow after millions of years. Some of them are nothing more than circular discolorations that identify striations composed of different chemical composition. According to the theory, hot mineralized water that once jetted out from the vent left ring-shaped cross-sections as the eruptions lost their geothermal energy and shut down after eons of existence. When the land and sea changed places, the fossilized vents relocated to the desert.

Modern science has retained the long-hoped-for desire that Mars could be the cradle of different life forms that arose and evolved in a separate ecology. As the overall theory goes, in order for what has become the subtext of nearly every presentation about Mars to exist, the planet must have gone through a stage when there were oceanic quantities of liquid water on the surface. This idea also implies that Mars once retained an atmosphere dense enough in oxygen (and a moderating gas) that life could respire in the open.

Some features cannot be the result of water erosion. Since they’re found within the so-called “alluvial fans” that seem to indicate deposits left behind by deltas or other aquatic action, then the backbone of that theory has a serious flaw. Another often-overlooked aspect to what is happening on Mars is the electrical activity that can occur when dry mountains of dust move as a large mass.

The supposed water runoff from the rims of large craters or down the slopes of giant volcanoes is probably not the result of melting ice from beneath the surface dust but from falls of dust down slope. The blackened tracks left by such falls provide evidence for their electrical origin and not an aqueous one.

The large-scale structure of Mars, with its continent-wide canyon, gigantic volcanoes, thousand-kilometer-wide craters, fractures, plateaus and blasted wastelands of crushed stone was most likely created a relatively short time ago, as has been written for many years in these pages. Planetary scientists are beginning to see the signs of catastrophe on the small scale. Now, they must lift their eyes to the heights and consider the origin of what they see in the cliffs and ridges.