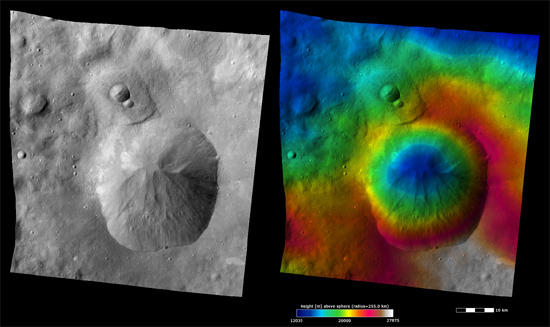 The Dawn mission continues in orbit around Vesta. Vesta is ranked high among minor planets, with Pallas (531 kilometers) and Ceres (952 kilometers) as its larger cousins. Ceres is also part of the Dawn mission, since the spacecraft will depart Vesta in July 2012 and travel for more than a year to reach it.

Some of the more interesting finds related to Vesta are meteorites recovered from the Antarctic ice that bear a striking resemblance to the spectrographic analysis of Vesta’s surface composition. Known as HED meteorites, they are crystallized lava made up of howardite, eucrite, and diogenite. Howardites are polymict breccias, a general term from the Italian for “loose gravel bound together by cement”.

Eucrite is a plagioclase, or feldspar, mixed with pigeonite, and is always associated with HED meteorites. Pigeonite is a pyroxene, or silicate rock, containing calcium, sodium, iron, magnesium, aluminum and oxygen in different ratios. Diogenite is a mixture of the pyroxene group and various feldspars. Since the combination of these minerals varies widely, HED meteorites can be classified by where they came from. Just as the gases in some meteorites show that they came from Mars, HED meteorites are identified with Vesta. In most cases, HED meteorites show recrystallization that indicates Vesta’s regolith remelted at some time after its formation.

Topographic data from Dawn is building up a picture of an object that has undergone a catastrophic resurfacing. What caused the punctures, gouges, and fractures that dominate its topography? On an asteroid a bit over 500 kilometers in diameter are craters 50 kilometers wide, with a 300 kilometer and more “impact” basin in the southern polar region. Vesta is covered with craters at every scale, it seems.

There are no definitive answers to the question of Vesta’s scars, since no one was there to witness the events. Seeing is believing. However, that philosophical viewpoint should be reversed to believing is seeing. A theory is necessary before facts can be gathered to confirm or deny it.

Given the mindset of consensus astronomers, impacts from other large, fast-moving objects are all that is theoretically available to explain Vesta’s condition. Indeed, every celestial body in the Solar System has experienced little else but gravitationally induced kinetic events, according to their understanding. Electric arcs and plasma torches are not even found in their lexicon.

In an Electric Universe, gas giant planets are born from stars; not all are born at the same time. They are born hierarchically at intervals, and typically from within the parent. They are ejected. Gas giant planets like Jupiter and Saturn could have also ejected smaller minor planets and moons if they experienced an electrical input that caused them to suffer double layer breakdowns in their electromagnetic fields. Too much charge buildup will cause a large body’s plasma filaments to generate z-pinches, thus compressing the plasma into solid matter.

The electrically charged bodies then accelerate in the electric field until they reach the gas giant’s surface and are shot into space. On their way out, they are pummeled by gigantic lightning bolts that rip and tear their exteriors, possibly melting them completely. Perhaps that is why most of the craters on Vesta appear softened and rounded.

Vesta and its cousins demonstrate their violent electrical births.