Home Picture of the Day The Chocolate Hills 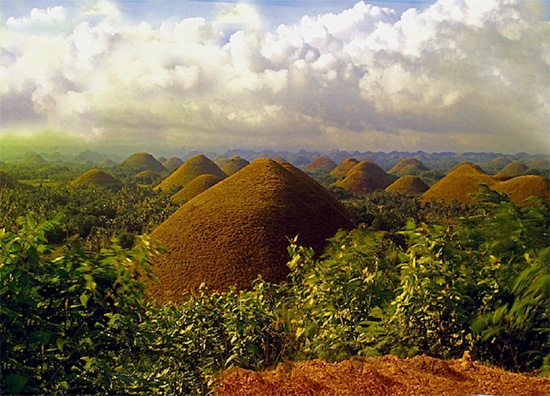 What formed the hundreds of limestone knolls in this region?

The Chocolate Hills are considered to be one of the seven natural wonders of Asia. They are composed of limestone that, according to geologists, has been eroded by rainwater and subsidence into what is known as a “karst formation”.

Since rainwater is a weak carbonic acid solution, as it flows through fractures, rock dissolves, forming underground rivers and caverns. The subterranean formations are thought to grow larger over time, so more water can drain through the system, allowing it to dissolve away even more rock, creating larger formations in an ever increasing feedback loop. Eventually, the terrain becomes a network of sinkholes, sunken streams, and springs. The rock that remains is said to be harder, so the rain is not able to weather it as easily.

The Chocolate Hills are cone-shaped mounds that cover an area of approximately 50 square kilometers. There are estimated to be as many as 1,700 hummocks in the formation, resulting in a rolling terrain like swells in a vast grassland sea. The hills vary in height, the largest reaching 120 meters and the smallest around 30 meters. During the Philippine dry season, the grass cover turns brown, thus the name, since they are reminiscent of giant Hershey’s Kisses.

There are other formations in Asia that are similar in composition and structure to the Chocolate Hills. The Huangshan Mountains in China, the Guilin Mountains (also in China), and Ha Long Bay in Vietnam. All three are considered to be karst, formed by the slow action of water erosion and collapse of underground voids. Regardless of the location, all of them are thought to have taken tens of millions, or hundreds of millions of years to form. The hallmark of modern geological theories is gradualism: the long-drawn-out processes that refuse to consider any catastrophic conclusions.

Admittedly, the lack of debris surrounding the Chocolate Hills could be due to the action of water washing away the rocks. However, there are no rivers or streams running around or between the Hills to carry the detritus, so what happened to what must be millions of tons of limestone?

In an Electric Universe, it is possible that planets and moons experienced a phase in their histories where they might have been engulfed by electric discharges, Earth included. In periods of intense arcing, trillion kilowatt bolts of lightning could have shattered and vaporized the rock, lofting it toward space. The excised material would have been removed in a process akin to industrial plasma etching.

Another possibility is that the electromagnetic fields derived from such forces could have scavenged sediments and other materials from the landscape, leaving behind solid masses like those in the Philippines, China or Vietnam. The action of gigantic electric arcs could produce structures that appear to have been eroded over the eons but that were made in an instant.

In previous Picture of the Day articles, it was noted that wind and rain dash themselves against the rocks like bugs on a windshield, but that does not mean that weather or insects created the shapes. Other articles describe stone monoliths all over the world that are difficult to explain: Australia’s Uluru, Africa’s Brandberg Massif, or America’s Half Dome. Instead of eroding down, they could have been electrically pinched up.

A fulgamite, or lightning blister, develops when an electric discharge pulls charged material from the surrounding area, incidentally dragging the neutral matter with it. A large enough electric arc will act like an enormous plasma tornado, with an extremely low pressure region in the center enclosed by powerful electromagnetic fields. It is this central vortex that can exert forces that crush and melt dust and other substances until they become stone.