Home Picture of the Day The Hairy Universe 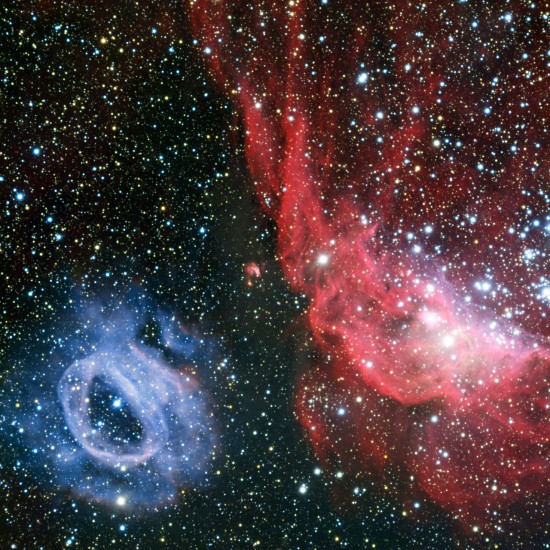 Popular accounts of nebulas usually omit mention of their “hairy” structure. Because gravity can’t produce long, evenly spaced filaments of matter, astronomers don’t talk about them. Perhaps they don’t even see them.

This double nebula is located in the Large Magellanic Cloud, a small, irregular galaxy that’s considered to be a satellite of our Milky Way. The conventional explanation is that the nebulas “were both sculpted by powerful stellar winds from extremely hot newborn stars that also radiate into the gas, causing it to glow brightly.”

The red light from the nebula on the right is emitted by ionized hydrogen; the blue light from the nebula on the left is emitted by ionized oxygen. The key word in this description is “ionized.” Conventional descriptions call the ionized hydrogen and oxygen “gas.” Without looking (or thinking) further, conventional astronomers rush to apply equations of gas and gravity to their first impression.

But wait: If the hydrogen and oxygen are ionized, they’re plasma, not gas. Experimental investigations (as distinguished from theoretical derivations from mathematical “first principles” [read: assumptions]) show that active plasma in open systems generates electric currents. They’re called Birkeland currents. They can self-organize into cells and filaments. Lab experiments demonstrate this tendency of plasma to separate into multiple parallel strands of regularly spaced current filaments.

The filaments as well as aggregates of filaments often twist around each other into waves of “plasma tresses.” The red nebula tosses its hair into space; the blue one wraps it into a ring. If you could run your fingers through this hair, you’d find it to be an electrifying experience.

Conventionally, the “gas” is thought to be ionized by “hot” radiation from the nearby stars. In the Electric Universe, the plasma is in glow mode because the current density is sufficiently high. The nebulas are a cosmic counterpart of a neon light. The nebulas and the stars with them are loads in the interstellar Birkeland currents that power them.

Nebulas are not the only objects with hair. These hairy structures are found throughout the Universe. The Sun’s corona and galactic arms are hairy. Comets are hairy. Venus’s “tail” is hairy (“stringy things,” as NASA called them). The Electric Universe is a hairy universe.