Home Picture of the Day Butterflies on a String

Butterflies on a String 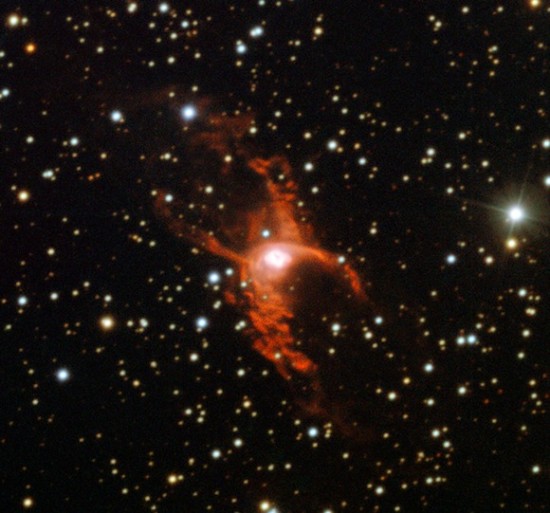 NGC 6537—an example of a bipolar planetary nebula. Recent observations of such nebulae near the galactic core show them to be aligned with the galactic plane. NGC 6537 was not included in the study. Credit: ESO

Modern astronomy has a planetary nebula (PN) problem: Gravity can’t do what PNs do.

Astronomers invent a kind of pseudo-magnetism to fill the explanatory holes. This pseudo-magnetism is a reified presumption that’s unplugged from the electric currents that generate real magnetic forces.

Consensus theory has PNs being formed in stars’ old age. A dying star “blows” its outer layers into the surrounding interstellar “gas.” One envisions a spherical bubble of far-apart atoms expanding into a medium of even-farther-apart atoms. Theory would have us believe that somehow enough of these atoms collide to produce a shock wave in the near vacuum of space. Perhaps that’s a plausible assumption: We have no way to test it in a lab because we can’t produce a vacuum of that magnitude.

To turn a spherical “blow” into a cylindrical “blast,” something besides gravity must be operating. Since astronomers know little about magnetism except myths (such as, that it comes in “lines” that can be “frozen” and rendered cause-free), they can conjure this pseudo-substance wherever they run into explanatory difficulties with gravity and gas. So frozen magnetism creates PNs.

But even fantasy has its limits. A recent study of PNs near our galaxy’s core showed their axes aligned with the galactic plane. “The alignment we’re seeing for these bipolar nebulae indicates something bizarre about star systems within the central bulge,” explains [Bryan] Rees. “For them to line up in the way we see, the star systems that formed these nebulae would have to be rotating perpendicular to the interstellar clouds from which they formed, which is very strange.”

Albert Zijlstra, the second author of the paper reporting the finding, echoes the surprise: “While any alignment at all is a surprise, to have it in the crowded central region of the galaxy is even more unexpected.”

“Surprise,” of course, is a euphemism for “falsification of theory.”

In the Electric Universe, stars form in Bennett pinches in galactic Birkeland currents. Where the concentric tubes of filaments in a Birkeland current develop an instability, the tubes pinch down into an hourglass shape. A plasmoid—a cell of plasma bounded by double layers, perhaps similar to ball lightning—forms in the pinch. The current flowing through the pinch powers the star (as a load in the circuit). If current density increases enough to push the plasma in the current into glow mode, the hourglass shape—or parts of it with sufficient current density—will shine in visible light. (The current always radiates in radio and frequently in x-ray “light.”)

Near the core of the galaxy, these currents crowd together as they feed into what is likely a dense plasma focus mechanism. PNs would align with the galactic plane more than they would farther away where there’s more “elbow room” for zigzags in the galactic “lightning.”

The press release remarks in a footnote, “Very little is known about the origin and characteristics of the magnetic fields that were present in our galaxy when it was young….”

Apparently, the few astronomers who were there failed to take appropriate measurements. Halton Arp once mused that it’s better not to know something that’s wrong than to know a hundred things that are right. Astronomers would be better off if the “very little” that they know about the young galaxy’s magnetism—their belief that it was frozen—were reset to “nothing.”