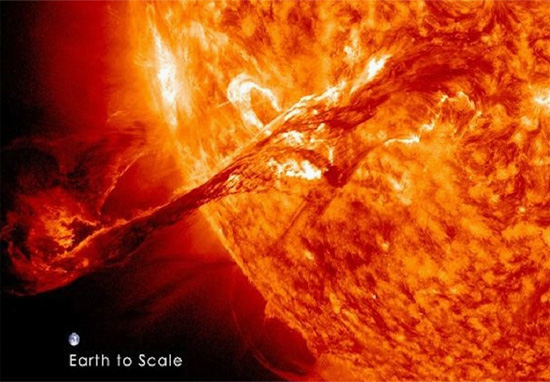 The intensity of the Sun’s magnetic field and solar wind periodically decline to low levels but explosive events are possible.

On August 25, 1997, NASA launched the Advanced Composition Explorer (ACE) satellite on a mission to monitor energetic ions coming from the Sun, as well as higher energy particles (cosmic rays) thought to be arriving from intergalactic space.

ACE is in orbit around the L1 LaGrange point approximately 1,500,000 kilometers from Earth and will remain there until 2024. Scientists hope that data from the spacecraft’s onboard sensors will help them understand how the Solar System formed, including how the solar magnetic field moderates incoming high-speed ions. Several research groups have been investigating a possible link between our climate and cosmic rays.

During periods of high activity, energetic pulses on the Sun eject charged particles in the billions of tons. They are normally slow moving, requiring about 24 hours to reach Earth. Known as Coronal Mass Ejections (CME), an indication of their arrival is an intensification of the aurorae.

When the Sun is in a relatively quiescent state with few sunspots visible, it occasionally erupts with solar flares that can reach incredible velocities. As a matter of observation, they continue to accelerate as they move away from the Sun. What explains this counterintuitive process?

Sunlight reaches Earth in approximately eight minutes. A solar ejection arriving in 30 minutes must be moving at more than a quarter of the speed of light. In the consensus view, such velocities are a profound mystery, yet a gigantic CME was observed on January 17, 2005, that reached our planet in less than half an hour. How do CMEs accelerate to 75,000 kilometers per second or more?

Rather than shock fronts or so-called “magnetic reconnection events”, the solar wind receives its impetus from an electric field that emanates from the Sun in all directions. The easiest way for charged particles to accelerate is within such a field. The Sun’s e-field extends for billions of kilometers, ending at the heliospheric boundary, which the twinVoyager spacecraft are just now beginning to penetrate.

The “mysterious” acceleration of positively charged solar wind particles is an electrical phenomenon that is predicted by the Electric Sun model.

Is it a coincidence that hurricanes Katrina and Rita occurred on either side of the second largest X-flare ever recorded?

In 1997, Henrik Svensmark and Eigil Fris-Christensen published “Variation of Cosmic Ray Flux and Global Cloud Coverage – a Missing Link in Solar–Climate Relationships” in which they argue for the Sun’s mediating influence on Earth’s climate. Essentially, the greater the number of high-energy ions that enter our magnetic field, the greater will be the cloud cover.

When the Sun enters a quiet phase in its 22 year cycle, more charged particles are able to reach Earth because the solar magnetic field is not strong enough to deflect them. As they encounter our watery atmosphere, they cause clouds to form. Similar to an old-fashioned cloud chamber, when fast moving ions fly through a region of high humidity a track of condensation appears. It was those threads of tiny droplets that were once used to monitor subatomic particles produced by linear accelerators or “atom-smashers.”

Mike Lockwood and Claus Fröhlich issued a paper in 2007 that contradicted any idea of a heliocentric influence on cloud cover. Although they acknowledge that it might have had a small effect in the past, they assert that humanity’s industrial activity is so great that it overshadows a solar connection. Of course, they completely ignore the role of electricity in space and contend for purely mechanistic and chemical interactions.

To Electric Universe theorists, the relationship between incoming high-speed protons from CMEs and increased storm activity, coupled with the analysis offered by Svensmark and Fris-Christensen, is not coincidental. Since water is a dipolar molecule, the fact that ions attract water vapor seems indisputable.