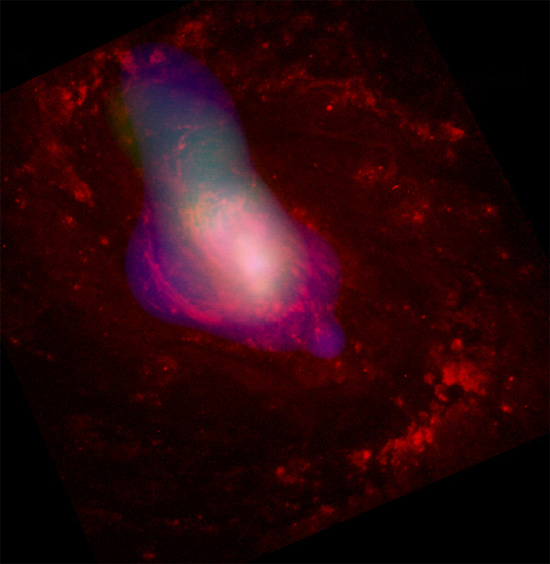 “Black holes are where God divided by zero.”

In a previous Picture of the Day, It was suggested that X-ray jets from a galactic core were being accelerated by electric fields. A press release from the Chandra X-ray Observatory reports that “strong winds” are racing outward from the core of NGC 1068, a galaxy said to be 50 million light-years away in the constellation Cetus. The source of the winds is supposed to be an “average sized” supermassive black hole (SMBH) that is accelerating “hot gas” around its event horizon until gravity can no longer hold it in place. The gas is said to be heated by X-ray bursts from the SMBH, whereupon it is ejected along a tangential trajectory at an average velocity of 1.6 million kilometers per hour.

In the image at the top of the page, Chandra’s X-ray results are combined with those from the Hubble Space Telescope to illustrate the temperature differences between the galactic body and the jet of X-ray emitting material. The hot gas possesses a spectrographic temperature reading of over 100,000 Celsius, 20 times hotter than the surface of the Sun.

To say that gas can be heated until it gives off X-rays and “blows like a wind” betrays a serious lack of understanding, or a careless presentation of observations. No gas can remain intact at such temperatures because electrons will be stripped from the nuclei, causing it to change into the primal stock from which the Universe is made: plasma.

X-rays in space, no matter the source, are not created in gravity fields regardless of how strong they are theorized to be. Charged particles (plasma) accelerated by electric currents spiral in the resulting magnetic fields and shine in all high energy frequencies, extreme ultraviolet, X-rays, and sometimes gamma rays.

In a galactic circuit, electric power flows inward along the spiral arms where it is concentrated and stored in the central plasmoid, or galactic bulge. When it reaches a certain current density it discharges, usually out of the galaxy’s spin axis as an energetic jet of plasma. Laboratory experiments have replicated the phenomenon with a plasma focus device.

Electromagnetic forces confine those jets into thin filaments that remain coherent for thousands of light-years. Chandra’s observations of NGC 1068 indicate that material from the galactic core reaches more than 3000 light-years from its source, but that estimate could be off by a significant factor. Jets usually end in double layer lobes that extend for many times the size of the galaxy and radiate copiously in radio frequencies. The diffuse currents then flow toward the galaxy’s equatorial plane and spiral back into its nucleus.

Hannes Alfvén identified the “exploding double layer” as a new class of celestial object. It is double layers in space plasmas that form most of the unusual structures we see. Galactic jets, toroids, and glowing clouds are all examples of electricity flowing through dusty plasma confined within Birkeland currents that stretch across the light years.