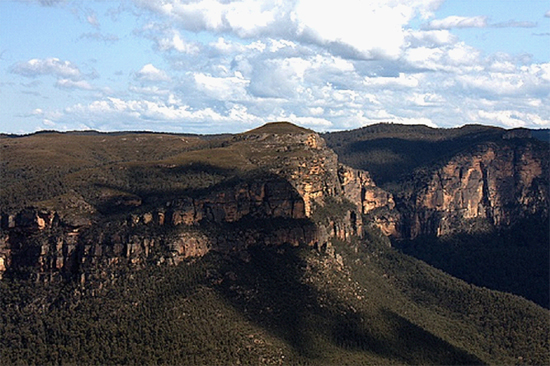 When considering the topography of our planet, it is possible to look at it in different ways.

The first consideration is that what is seen can be viewed with an assumption that it took millions or billions of years to form the current landscape.

Second, considering only known forces: wind, water, volcanic action, and plate tectonics, an assumption can be made these are the only forces at work. In this respect, there has been little progress beyond the 1800‘s, when scientists already thought they had worked out how this planet was shaped. However, like the Mount Banks area shown above, water does not cut through mountains and leave vertical cliffs. In fact, water appears to follow what is already there and “adopts” channels that have already been carved into the rock.

If one takes time to appreciate Earthly terrain, there is a wealth of evidence that seems to point to features here that are similar to other planets where wind, water, plate tectonics, and volcanoes are missing.

The state of Victoria in Australia is a good example. It is assumed that nothing much happens there: the continent is too old, all the mountains have eroded away, and apart from the occasional tremor, it is a quiet place geologically speaking. A close examination tells a different story.

In the Google Maps internet search application, enter Panmure, Victoria. Switch to the terrain option under “More” and zoom out one click. What is seen? A chain of craters. What is the explanation? Conventionally speaking, multiple impacts or sink holes are the only option, although some of the craters have central dome structures. They are also nearly circular, leaving the impression that whatever caused them was some sort of vertical force.

Performing a similar search for Noorat, Victoria uncovers a beautiful cone structure that is said to be an old volcano.

Ballarat, Victoria is next. At the top side of the city on the map there are multiple domes and multiple cones. Victoria, along with the rest of Australia, has the highest concentration of cone, dome, and crater structures in the southern hemisphere. The Google Maps “terrain mode” selection provides a clearer view of the formations, along with the “satellite view.” Mafeking, Victoria is another interesting search.

The occasional crater might be explained by consensus geological opinions, but multiple craters in chains, along with multiple domes in cones are not so easy to explain.

No crater in Victoria is registered as an impact site. Neither are the cones registered as volcanoes. They are simply “anomalies.” Perhaps if they are ignored, they might just go away.

The Electric Universe hypothesis provides a possible way for all these shapes to form. Rather than taking millions of years, they might have come into existence within the memory of humankind. Aboriginal folklore suggests that people witnessed some of the formative events.

What happened to Victoria has to be taken in context with the rest of the Solar System, not as if it were isolated to one place or even to one planet.