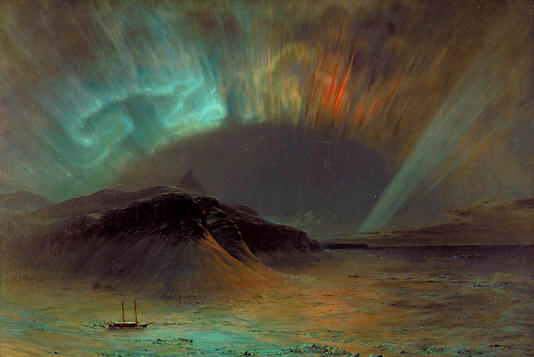 To eyewitnesses, including those at lower latitudes, highly energetic formations produced by extremely vigorous aurorae have often suggested some form of painting or supernatural inscription on the canvas of the sky.

This was the case with observers of the prominent aurorae spawned by the coronal mass ejection of 1859. From Stockton, central California, came the report that the “great streams of red and blue” appearing after 9:00 PM on 28th. August “would faint and brighten in such a wonderful manner, that we imagined some painter in the skies drew his great brush from the horizon up to 40 or 50 degrees, dipped with vermillion, then with sky blue, and then with white and flesh color.” Even more graphically, and as far south as 13º 18´ North, an observer from La Unión, San Salvador, reflected as follows on the display that followed a few days afterwards:

“On the night of Sept. 2d, a most extraordinary phenomenon was witnessed. … a dense black cloud arose in the east, and commenced to spread over the colored portion of the heavens, presenting a most curious spectacle; for in the parts where the cloud was not dense enough, the red light shone through, and formed a thousand fantastic figures, as if painted with fire on a black ground.”

And certainly it must have been a similar sentiment that drove the talented Danish photographer and auroral expert, Sophus Tromholt (1851-1896), to wonder:

“Will man ever decipher the characters which the Aurora Borealis draws in fire on the dark sky? Will his eye ever penetrate the mysteries of Creation which are hidden behind this dazzling drapery of colour and light?”

Tromholt’s writings exude a striking sense of intellectual honesty regarding the boundaries of current understanding. By ‘decipherment’ of auroral “characters” in the sky Tromholt clearly meant a figuring out of the physics underlying the shapes and colours that presented themselves to the eye. With the passing of more than a century, this task has been largely accomplished by today’s plasma physicists. At the same time, Tromholt’s words convey the sense of numinous awe many have felt upon exposure to this celestial drama. Considering the marked emotional impact powerful aurorae tend to have on human minds, it would not be surprising if the appearance of discreet light structures in the sky had provoked similar associations with painting in people of prehistoric times. Seemingly charged with religious significance, these ‘cosmic fingerprints’, in which many strove to read omens for the future, could have prompted human spectators to record their observations for posterity.

What would have been more natural for them than to mimic the art of the ‘gods’ to the best of their ability – painting or carving the selfsame images on a darker background, perhaps leaving colours that were reminiscent of the auroral prototypes themselves? Arguably the most obvious type of enduring canvas ancient artists could resort to would be parietal – the surfaces of walls and rocks, which are found today to be filled with millions upon millions of paintings and carvings.

Indeed, in 1976, the American physicist, George Siscoe, figured that the earliest depictions of aurorae might be found in the ‘macaronis’ or serpentine meanders painted on rocks and cave walls: “The most dramatic example of this possibility is to be found on the ceiling of the cave of Rouffignac in France, where lines drawn in the red clay ceiling resemble the folded curtain patterns of the aurora.” Although it may seem puzzling that Cro-Magnon people would have preoccupied themselves with a natural phenomenon that rarely occurs at their latitude, conditions are bound to have been different in the past:

“We know that there have been more than 30 reversals of the earth’s magnetic field in the last 10 million years. Associated wandering of the magnetic poles would have resulted in periods when the aurora was seen much more frequently at mid-latitudes than is the case today. Consequently, it is not unreasonable to suppose that Stone Age man gazed with concern at flickering auroral lights and perhaps recorded them in his art.”

This view is endorsed by members of NASA’s THEMIS team, who concluded from this type of rock art that aurorae “have influenced the course of history, religion, and art” from prehistoric times. Other specialists on the polar lights have also speculated “that a great deal of the very ancient engravings which have been found in several grottos along the Mediterranean Sea are in fact pictorial representations of the northern light.”

Moving beyond speculation, a recent comparison with the observed behaviour of high-energy-density plasmas in laboratory, in space and according to particle-in-cell (PIC) simulations suggests that not only some of the French and Spanish cave paintings of the Cro-Magnon era may include auroral motifs, but also the worldwide impressions on rock, typically exposed to the open air, that proliferated from the end of the Palaeolithic and throughout the Neolithic period, roughly from 11,000 BCE to 3,000 BCE, though in many places continuing into later periods. Rupestral art as a whole appears as one monolithic witness to the possibility that awe-inspiring plasma filaments painted their characteristic nonfigurative images in the firmament first.