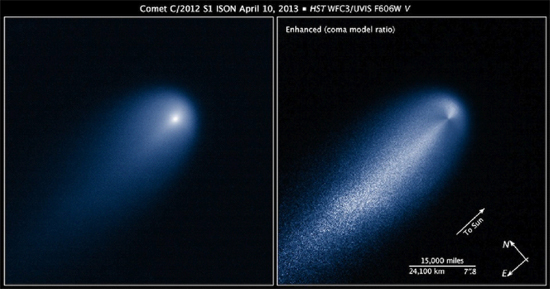 The Hubble Space Telescope has returned remarkable images of Comet ISON, revealing structures that appear to confirm the electrical nature of comets.

Recent observations of Comet Pan-STARRS in April of 2013 confirmed that it would not be one of the “comets of the century” that astronomers are hoping for this year. The next comet that is slated for a dazzling display is Comet ISON.

Comet ISON is already demonstrating the electrical characteristics that are familiar to Electric Universe proponents: multiple tails, bright jets, and the presence of carbon in large quantities. According to astronomers, the comet has “not yet” shown any indication of water vapor. The so-called “venting” of water vapor should take place as the comet gets closer to the Sun, as theory suggests.

Many articles have been written about the misrepresentations and misinterpretations from NASA scientists when it comes to comets. In fact, a major issue of fair use policy and public access to information gathered by publicly funded institutions is now being debated by Electric Universe advocates and some members of those institutions related to comets.

An October 2007 Picture of the Day described the behavior of Holmes 17P and noted that many of the observed phenomena could be explained by an electrical theory of comets. Since these pages were first published, Electric Universe theorists have challenged the prevailing “dusty snowball” cometary theory. Comets becoming active at long distances from the Sun—sometimes as far out as Neptune’s orbit—contradict the idea of a frozen ball of ice that only grows a tail or emits jets of gas when it gets close enough for the Sun’s heat to sublimate its surface.

Hale-Bopp, a naked-eye comet that hung for weeks like an exclamation mark in the 1997 sky, was still active four years after it left the inner solar system. When it was farther from the Sun than the orbit of Uranus it was almost two million kilometers in diameter. It displayed a coma, a dust tail, and an ion tail more than a million kilometers long. Solar radiation will not melt ice at that distance, otherwise the moons of Saturn and Jupiter would be bone dry, so astronomers were unable to explain it.

In August of 2007, Comet Linear broke apart during its closest approach to the Sun. When the cloud of debris was analyzed, astronomers were surprised to find that it contained about 100 times more rocky material than ice.

The European Space Agency’s Giotto probe met Halley’s Comet on March 16, 1986. Among several discoveries, the comet was found to be covered with a black crust. Bright jets of ionized gas, or plasma, blasted out from its surface in three highly localized areas. Water was present in Halley’s coma, but according to Horst Uwe Keller of the Max Planck Institut für Aeronomie: “We discovered that a comet is not really a ‘dirty snowball’ since dirt is dominant, not ice. Instead of being spherical like a warm snowball, a comet nucleus is elongated. The physical structure of a comet’s interior is defined by its dust content rather than its ice content.”

Comet Shoemaker-Levy 9 fragmented into several large pieces that plunged into Jupiter’s atmosphere during the summer of 1994. It was hoped that the remnants of the fractured nucleus would expose fresh ices that would then sublimate. Spectrographic results from the Hubble Space Telescope showed no evidence for volatile gases in the debris clouds around the fragments. Auroral emissions were also detected in the atmosphere of Jupiter after the impact of fragment K, something that was unexpected and then attributed to “snowplow” effects as shock waves pushed the atmosphere aside.

What were the “streamers” found inside the shell of gas and dust that made up the haze around Holmes 17P? Spitzer team members could not determine why the twisted threads of material continued to point in the same direction. They remained in the same alignment despite several months of travel. As has been discussed in previous Picture of the Day articles, the braided filaments are the sign of helical Birkeland currents.

Outbursts like those on Holmes 17P, and now the carbon dioxide outgassing observed on Comet ISON, are how Electric Universe theorists expect comet tails to be produced. Because electric discharges are capable of removing solid material from surfaces, no volatile gases exploding out of “trapped pockets,” then pushed away by radiation pressure, are necessary. A comet will produce a tail when electrical stress reaches a critical point and its plasma sheath starts to glow. Irrespective of its composition, a comet will obey the fundamental behavior of charged objects interacting with one another.

A comet’s tail is created when its electric charge it struck by solar discharge plasma, conventionally called the “solar wind.” As a comet approaches the Sun, its nucleus moves through envelopes of increased charge density. Its surface charge and internal polarization, developed in deep space, respond to the Sun’s charged environment, changing its electrical potential.

As it moves away from the Sun, a comet’s electrical balance with respect to the outer solar system will be different than when it was on its inward trajectory. If it meets another electrified plasma field of some kind it could begin to discharge again. What more electrically dynamic region than the one that exists around the gas giant planets?

Recent revelations about comets are more easily understood within the electric comet theory than within theories that depend on gravity and sublimation. The black, burned nuclei; the craters and rocky landscapes instead of ice fields; the narrow, energetic jets; the ion tails pointing toward the Sun; the sulfur compounds that require high temperatures to form; and the abundance of ultra-fine dust all point to electricity as their common source. Most important of all, water vapor is more prevalent farther away from the nucleus than close in—surely the exact opposite of what should be found if water ice and frost are what drive cometary jets.