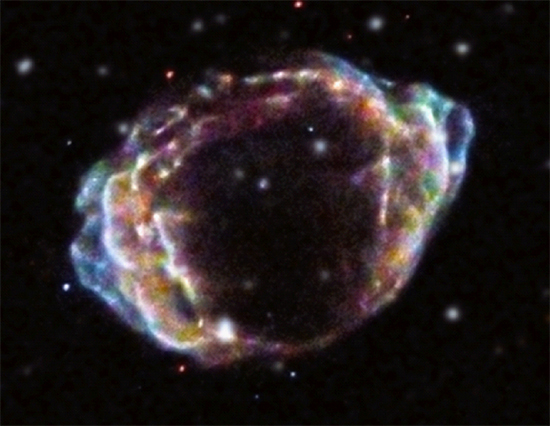 The oval of filaments and bright spots in the relaxation phase of a previous star-wide exploding double layer (EDL)—conventionally called a supernova remnant (SNR). The initial event (the “supernova”) was most likely an interruption of the current in the galactic Birkeland current driving the star. A star-wide instability in the photospheric double layer caused it to “switch off,” and the inductive energy of the rest of the circuit was released into the gap.

Electromagnetic forces in the current surge caused the double layer (DL) to expand explosively, similar to a coronal mass ejection but encompassing the whole star. The DL would accelerate photospheric plasma outward; also, its stronger electrical field would accelerate current carriers—primarily electrons—to relativistic velocities. These electrons would spiral along the magnetic field of the supply current and emit synchrotron radiation.

The “wiring harness” of the supply current consists of concentric tubes of current filaments pinched into an hourglass shape around the star. It is invisible (in dark mode) around most stars, but it appears in glow mode around stars that are under greater electrical stress, such as so-called “planetary nebulae” and “SNRs” when viewed off-axis.

In this image, Chandra is looking almost down the axis, so the wiring harness appears as rings. Where the EDL intersects the evenly spaced filaments of the harness, the density of current carriers increases and bright spots appear. This is apparent along the top half of the rings, where at least two of the concentric tubes can be discerned. (Alternatively, one ring could be on the opposite side of the star and be seen through the near side of the hourglass.)

In an electrically powered star, nucleosynthesis occurs in the strong electric fields of the photospheric DL. It acts much like a lab linear accelerator and produces heavy elements such as silicon and iron near the surface. In a super-EDL event, the process may speed up immensely and produce large amounts of heavy elements.

Because of non-linear variations in the current, the distribution of elements and the expansion of the EDL may be asymmetric. The Chandra observations reveal that silicon, sulfur, and iron are concentrated in the northern part of this nebula, where the bright spots indicate a maximum of electrical stress.