Home Picture of the Day Appearances of the Fourth Kind

Appearances of the Fourth Kind 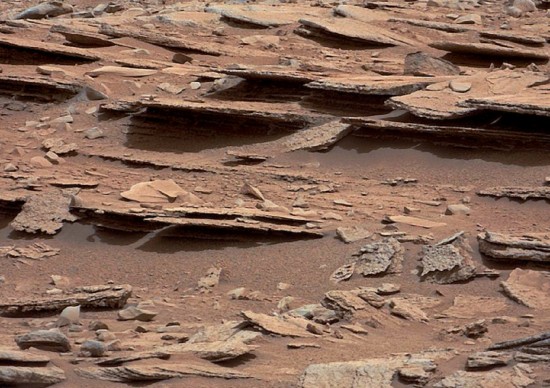 Is planetary science correct to use Earth as the basis for explaining other planets?

Recent images from the Mars Science Laboratory, otherwise known as the Curiosity Rover, are suggestive of sedimentary layering and “crossbedding“. Martian areologists claim that the slabs of rock they observe are similar to shale deposits on Earth. The formation was given the name “Shaler” for just that reason.

There is no evidence of shale on Mars. Its surface is largely composed of iron and silicon, with massive quantities of oxygen bound into the soils and bedrock. Although much like Earth geology in some respects, the crust is low in aluminum, one of the most common elements on our planet. Since the atmosphere on Mars is so tenuous—sometimes described as standing on top of a mountain six-times higher than Everest—it lacks the ability to aggressively attack the Martian lithosphere.

On Earth, water vapor in the atmosphere forms a weak carbonic acid solution when it mixes with carbon dioxide and that helps to wear away the rocks. On Mars, such erosion is impossible for several obvious reasons, not the least of which is that there is no open water on Mars or in its atmosphere.

The presence of iron oxide in several different forms causes some investigators to conclude that there was once a dense, oxygen-rich atmosphere that allowed for “rusting” of the iron in its crust to take place. As the overall theory goes, in order for what has become the subtext of nearly every presentation about Mars to exist, the planet must have gone through a stage when there were oceanic quantities of liquid water on the surface. Modern science has retained the long-hoped-for desire that Mars could be the cradle of different life forms that arose and evolved in a separate ecology. Indeed, that is Curiosity’s primary mission, the search for life.

The striated and layered rock in the above image is sharp-edged and broken into angular polygons. The fissures running through the area are filled with pebbles and fine dust. Close up images of the layered chunks reveal some of them to be razor-thin. Similar structures were observed by the Opportunity Rover, still alive and rolling through the Martian terrain.

Those formations exhibit fractures that radiate in concentric arcs from what appear to be hollow impact zones, and have been roughly etched, or eroded away on top. The cracks have edges that are also sometimes razor-sharp. Many are undercut. Several seem to have been sliced off at ground level from large blocks composed of the same material. They cannot be the result of water erosion, and Shaler is not.

Due to their close resemblance to terrestrial physiography, the shapes on Mars are thought to be extremely old and cut by water millions of years ago. Electricity is never part of the equation when geological theories are presented. Failing to consider it, NASA scientists have missed a vital clue in the search for answers to the puzzles of planetary scarring and the origin of Martian surface features.