Home Picture of the Day X-Jets 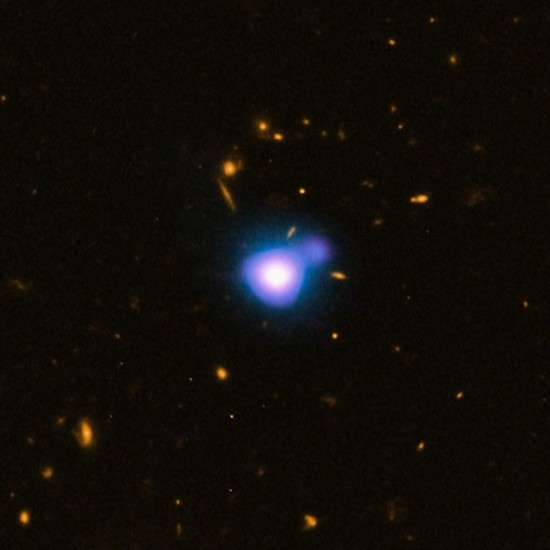 X-rays in space are an electrical phenomenon

According to a recent press release, the most distant X-ray jet ever observed is spewing from a supermassive black hole (SMBH) in the center of a quasar known as GB 1428+4217, extending for an estimated 230,000 light-years from the source.

The consensus opinion among astrophysicists is that the SMBH pulls matter from the surrounding stellar neighborhood, where it is accelerated by an intense gravity field. The extreme velocity supposedly heats up particles as they approach the speed of light. It is that excitation that is said to create X-rays.

Ironically, the Chandra X-ray Telescope science team suggested that “… radiation from electrons spiraling around magnetic field lines in the jet” could be a source for the X-rays. However, they “favor” the idea that it is the cosmic background radiation that is somehow being “boosted”, causing the jet to be so energetic that it is visible over a distance greater than the diameter of multiple galactic superclusters.

Previous Picture of the Day articles argue that the aforementioned cosmic background radiation is a red herring. It is a phantom observation based on faulty experimental design and shoddy detection techniques.

Irrespective of the misinformation provided by fallacious data, X-rays in space, no matter the source, are not created in gravity fields regardless of how strong they are theorized to be. Charged particles (plasma) accelerated by electric currents spiral in the resulting magnetic fields and shine in all high energy frequencies, extreme ultraviolet, X-rays, and sometimes gamma rays.

An electromagnetic z-pinch can squeeze plasma with such force that it rapidly compresses. Electric current flowing into the z-pinch might cause the plasma to erupt in an arc-mode discharge. It is plasma structures that are also seen in nebulae, as well as the “remnants” of supernovae; they behave according to the laws of electric discharges and circuits.

In a galactic circuit, (also applicable to quasars) electric power flows inward along filaments in the disk, where it is concentrated and stored in a central plasmoid. When it reaches a certain current density it discharges, usually out of the quasar’s spin axis as an energetic jet of plasma. No concentrated gravity from hypothetical super-compacted objects is necessary. Classical electromagnetism is more than able to create the phenomena that Chandra observes, without recourse to the supernatural physics of SMBHs.