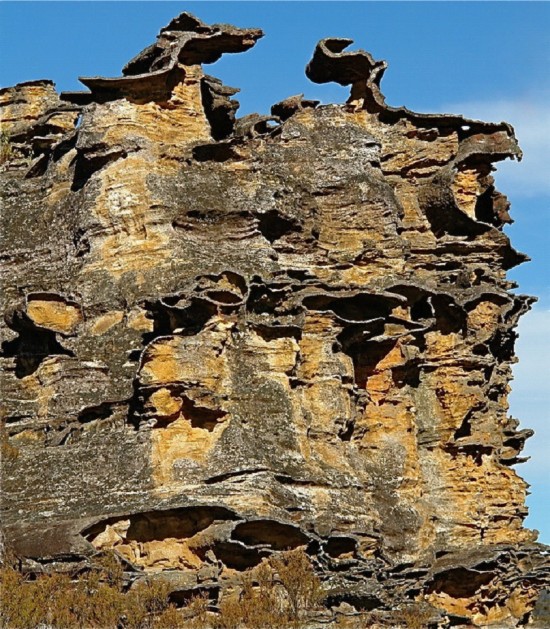 Northwest of Sydney, Australia are straight-cut sandstone canyons and circular formations. Could they be evidence for electrical discharge?

The Australian continent exhibits some of the more unusual geological formations on Earth. Giant sandstone monoliths rise out of a region in the middle of the continent called the Red Center, revealing rock matrices with anomalous striations, gouges, and scallop-shaped edges. The surrounding landscape is flat and relatively featureless, although there are brachiated channels that appear as if kilometer-wide lightning bolts descended and carved the terrain. The majority of the dendritic “drainages” are dry and provide little evidence for water flow as the formative agent.

The East coast of Australia is marked by elliptical cutouts, stretching from Noose Heads in the north all the way down to Eden in the South. The arc-shaped beaches are reminiscent of the Carolina Bays on the eastern seaboard of the United States. Both geographical territories display another attribute in common: deep bays that cut inland for several kilometers, also with a treelike structures known as Lichtenberg figures. King’s Point, Jervis Bay, Gymea Bay, and Sydney Harbor itself are much like Chesapeake Bay, Virginia.

Although the majority of geologists describe bays and their associated estuaries in terms of erosion—the slow, steady wasting of the coastline because of ocean activity or the movement of great rivers flowing down to the sea—some are isolated from the ocean by narrow, enclosing bars. Also, some have no rivers flowing into them. In previous Picture of the Day articles, it was suggested that electric arcs could have chiseled the bays and drainages into the terrain during a catastrophic event a few thousand years ago.

Approximately 100 kilometers inland from Sydney Harbor is the Wollangambe Plateau, a designated wilderness park located in the Blue Mountains. One place in Wollangambe with strange formations is Gooches crater. Gooches crater is unique for its many vertical sandstone cliff walls and haystack-shaped structures known locally as “pagodas“.

The pagodas are situated within the rim wall of Gooches crater but are an isolated grouping that appears to have been separated from the cliff face by whatever force created them. One of the unique aspects of the pagodas is their multiple layers of sandstone interlaced with a harder mineral often referred to as “ironstone.” There is another place far from Australia in the Nevada desert where comparable sandstone figures called “beehives” are located: the Valley of Fire. However, the beehives are not layered with harder ironstone sheets.

The ironstone is found in close association with the more abundant sandstone, often enclosing it in an oblate casing. Sometimes the ironstone casings are hollow inside and fall out of the pagodas like eggs. Other hollow shapes with characteristics resembling ironstone pipes remain in situ, but crack open, or break into pieces, again showing their empty interiors. It seems likely that the ironstone forms are actually fulgurites caused by gigantic lightning strikes.

If the structures in Gooches crater (and eastern Australia, in general) were caused by plasma discharges on a scale that can no longer be seen on Earth, then what caused the discharges? There must have been some charged object near enough to our planet for divergent electrical potentials to equalize one another. Since electricity flows in circuits, there had to have been some other terminal out of which the current arose or into which it flowed.

Perhaps it was an asteroid hundreds of kilometers in diameter. Perhaps it was another planetary body. At this juncture, divorced as we are from the remote past, we will probably never know for sure. What is left to us, for example, are stories told by the aboriginal people that have inhabited Australia for thousands of years. The Yolngu tribes have chronicled lightning as an energy burst arising from the land. Gods as tall as mountains who strode across the sky were also said to have created Australia and taught the story of creation to its inhabitants.

It is possible that the ancient creation myths, not only from Australia but from all over the world, are talking about the energies released by planets in catastrophic conflict. When gods ruled the world and white-hot lightning serpents as wide as the sea did battle with each other during an archaic theomachia, they might have left the scars of their “god-battles” etched into the topography of every continent.

Written by Stephen Smith from information provided by Garry Maxfield.