Home Picture of the Day Good as Gold 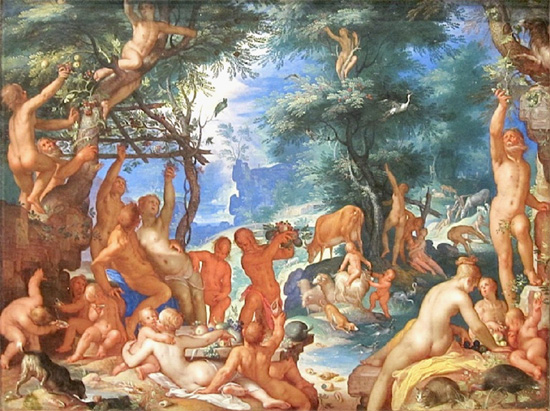 The proverbial ‘golden age’ is a classic case study in the difference between local and global themes in mythology.

It was the German ethnologist Adolf Bastian (1826-1905) who first introduced a systematic distinction between universal ‘elementary ideas’ (Elementargedanke) and culture-specific ‘folk ideas’ (Volksgedanke) in 1860.

Taken literally, the mythical motif of a ‘golden age’ seems limited to the Graeco-Roman tradition concerning the paradisiacal reign of the mythical king Krónos (Greek) or Saturnus (Latin) and the derivatives of this theme in western culture. Apparently the first to employ the term itself (aurea … aetas) was the poet Ovid, in his idyllic picture of life under Saturn’s sway:

‘Golden was that first age, which, with no one to compel, without a law, of its own will, kept faith and did the right.’

At the dawn of Greek mythography, Hesiod had already associated the god’s administration with ‘a golden race of mortal men’ (chrýseon … génos merópōn anthrṓpōn), but extant sources never clarify the link between the god, the good and the gold. In astrology, Saturn’s characteristic colour was invariably black, but the possibility that an earlier Near Eastern culture had linked an exemplary divine king with the planet Saturn and its yellowish hue, linked with the metal gold, has never been ruled out.

No golden age or race crops up in the sacred lore of any other cultures. The closest analogue to Krónos-Saturn is perhaps the Chinese god Huángdì – the famed ‘Yellow Emperor’. First mentioned in the 4th century BCE, this was likewise a pined-for monarch, though not the first or second one in line, who was recalled as the founder of agriculture and of culture as a whole. In their theory of the ‘five elements’ and related planets, Chinese astrologers situated Huángdì at the centre with the element of ‘earth’, surrounded by the four cardinal directions. As in Greece, the rationale for the emperor’s yellowness has vanished in the mists of time; the sources at our disposal remain as taciturn as gloomy Saturn.

Two isolated cases of a ‘yellow’ lord of paradise do not make a universal archetype; all that glitters is not gold. One possibility is that the Greek and Chinese traditions shared a historical root, as has been argued for other aspects of their respective cosmologies. Alternatively, both may have developed along parallel lines in astrological thought, perhaps during the late 2nd millennium or early 1st millennium BCE.

What is global in connection with the not-so-golden age is the wider theme of a former ‘age of bliss’, inextricably linked with a ‘time of the gods’, ‘of myth’, or ‘of creation’. Common, interrelated traits in traditions of this sort are harmony between all living creatures, an equality of seasons, an abundance of food, a low sky or sun, and the presence of spiritual or mythical beings on the earth. For example, a spokesman for the Tohono O’odham (southwestern Arizona) reflected:

‘In these primeval days all men and animals lived in harmony, and spoke a common language. … At that time the sun was nearer to the earth than now, the seasons were equal, and there was no necessity for clothing to guard against the inclemency of the weather.’

The natives of San Cristoval (Solomon Islands, Melanesia) looked back upon ‘the time of the infancy of the human race’ with fondness: ‘In those days all the fruits of the earth grew without labour, and all was of the best … and death had not yet appeared.’ And the Makaritare (Venezuela) recalled: ‘There was no sickness, no evil, no war. The whole world was Sky. No one worked. No one looked for food. Food was always there, ready. … There was just light. … Because of that light, the people were always happy. They had life. They couldn’t die.’

For many traditional societies, including the ancient Greeks and Romans, the termination of illud tempus (‘that time’) marked the transition from a primeval condition of liberty – free from the trappings of religion, politics and society – to civilisation. Almost invariably, the customs and skills that define the cultured state – with emphasis on farming – were traced to the departed deities, including the benevolent ‘kings’. In this broader sense, the ‘golden age’ was typified by an absence of law and government, trade, architecture, war and agriculture.

In the real world, allusions to this pristine and felicitous ‘age of paradise’ are inseparable from the ascendancy of human civilisation at the onset of the Holocene epoch, in the wake of the last ‘ice age’. Ovid’s portrait of the people of the ‘golden age’ reads just like a recollection of ‘cavemen’ turning into the first farmers: ‘In that age men first sought the shelter of houses. Their homes had heretofore been caves, dense thickets, and branches bound together with bark. Then first the seeds of grain were planted in long furrows, and bullocks groaned beneath the heavy yoke.’

As for the pacific mentality associated with this ‘golden age’, there may be more to this than simple nostalgic retrospection. If cross-cultural themes such as the ‘creation of the world’, the low-hanging sky, the axis mundi and proximity of the ‘gods’ related to a period of geomagnetic instability, with a surge in energetic near-earth plasma activity, changes in the so-called Schumann resonances may have collectively affected living beings with a nervous system, just as they are known to do today.

The Schumann resonances are distinct global peaks within the magnetic fields produced as a result of lightning discharges, resonating within the ionospheric cavity. These appear to modulate the physical and mental health of animals. Perhaps fluctuations in these resonances induced experiential states of peace for a time of ‘paradise’, followed by modes of terror and anxiety for the ensuing ‘wars and departure of the gods’.

Embryonic speculations such as these may be the tantalising glimpses of a new intellectual horizon. Is a golden age of science upon us?