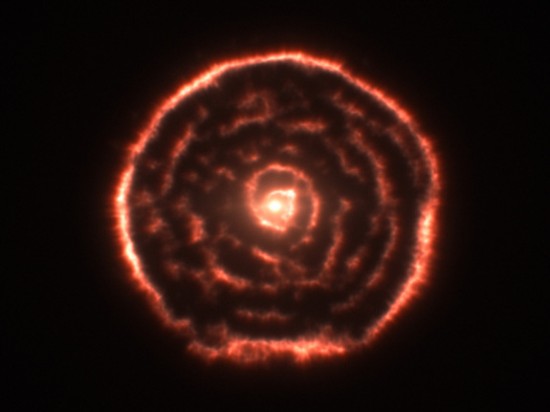 The geometry of gravity is spherical: a uniform attraction toward a center of mass that tends to produce ball-shaped objects. This “bias for balls” predisposes astronomers to interpret rings as spherical shells.

The European Southern Observatory press release announcing new observations (above) of the “old” star R Sculptoris illustrates this bias for balls. The term “shell” or “spherical shell” is repeated ten times to describe what appears to be a ring. The standard excuse is that a spherical shell of glowing material will from a distance look like a ring. The tangential depth of material at the edge will look brighter than the perpendicular depth of material at the center. The effect is called limb brightening.

In the low-resolution days before space telescopes, the excuse was plausible. But even then some astronomers were concerned that the rings’ inner edges were a bit too sharply bounded: limb brightening for a uniform shell should fade uniformly to the center brightness. The brightness of the Ring Nebula, for example, ended abruptly at its inner edge.

Space telescopes, followed by the enhanced optics of terrestrial telescopes, revealed—and continue to reveal—“totally unexpected” structures, in the words of this and countless other press releases. The first surprise was filamentary hourglass forms, obviously seen from an equatorial direction perpendicular to their axes. Further discoveries revealed forms that suggested the hourglass shapes were being viewed at intermediate angles to their axes.

The question arose: Were the rings simply hourglass forms being viewed down the axis? Rings of evenly spaced dots seemed to confirm this interpretation. High-resolution details bolstered this view. In the image above, for example, not only does the ring have well-defined inner and outer edges, but it’s composed of evenly spaced radial filaments, corresponding to the filaments in the equatorial views.

Such structures are not easy to explain with the spherical forces of gravity and gas. Auxiliary hypotheses (aka “fudging”) are required. If astronomy were a science, if astronomers adhered to the Popperian convention of falsification as the demarcating criterion between science and pseudoscience, they would long ago have admitted that they had lost the shell game. However, reputations were at stake: They bet they could insist that what they were doing was science, and the authority of their prestige would eclipse the logic that what they were doing was pseudoscience.

The discovery that the “gas and dust”—another oft-repeated and oft-falsified idea—that make up cosmic bodies are actually plasma provides straightforward explanations for these “totally unexpected” structures. Electric currents in plasma tend to form filaments (Birkeland currents). The filaments tend to braid together into cables or tubes of filaments that can transmit electrical power over large distances. Smaller-scale currents can be induced inside the larger-scale filaments, leading to hierarchies of coupled circuits that can provide power to bodies from galaxies to Martian dust devils.

Fluctuations in the various properties of Birkeland currents (density, temperature, ionization, and so on) can cause instabilities, for example, pinch and sausage or ball effects. Radiation from these instabilities is powered by the circuit and can exceed the energy available locally, surprising astronomers with “far more material than expected” being thrown off the star, as is admitted in this press release.

Because electromagnetic forces are usually many orders of magnitude greater than the mechanical forces of gravity and gas, gravity and gas dynamics are often irrelevant in explaining cosmic phenomena. Irrelevancy is not conducive to the advancement of one’s prestige, and so astronomy has become… a shell game.