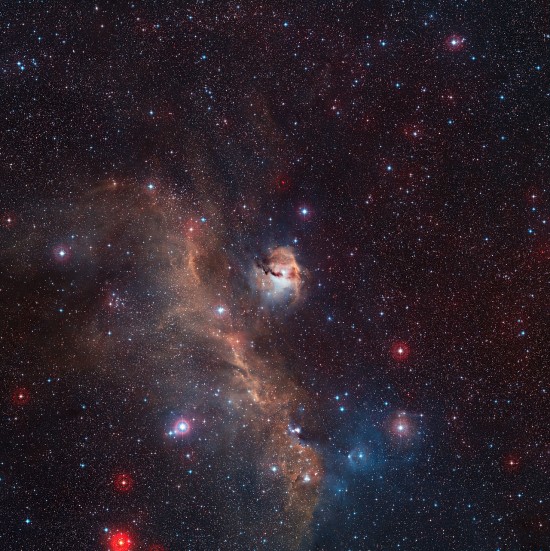 To talk about something, we have to conceive ideas and words with which to describe the thing. We can’t avoid these pre-conceptions. But will we try to compensate for this prejudice by conceiving more than one?

The Seagull Nebula is a splotch of light that resembles a bird: the streak is the wings; the round smudge is the head. Astronomers see a cloud of gas, but they were thinking “gas” before they saw the light. A person who thinks “plasma” before he sees the light will see electrical Birkeland currents.

“Clouds of gas and dust” is a century-old idea that persists despite the discovery of plasma. Astronomers will say “ionized gas” without awareness that the ionization makes it plasma. They talk about ionized regions around hot stars and blame the ions on the stars’ ultraviolet radiation, as in the head of the Seagull Nebula.

A person who thinks “plasma” instead of “ionized gas” will consider that cause and effect may be reversed: the ionized region may be in glow-mode as the current that powers the star pinches down to a greater density. Astronomers gloss over the cavities and networks in the glowing region as effects of winds and shocks. They lack the vocabulary of double layers and cells that are part of the plasma lexicon.

The long-range-attraction, short-range-repulsion forces in plasma filaments tend to make them twist around each other and braid together into thread-like cosmic transmission lines. This tendency is apparent in the glow-mode section of the current that comprises the Seagull’s wings.

Electrical currents in plasma can be in dark mode: the current density is low enough that the radiation is not at optical wavelengths. The self-generated magnetic field will still tend to pinch the current into a filamentary form. Such dark filaments are faintly visible (or perhaps “faintly invisible” would be better) above and below the Seagull’s head and to the left of the wings.

Standard-theory astronomers think of these dark filaments as “molecular gas.” The filaments might be gas if it weren’t for the frequent presence of magnetic fields and radio and x-ray radiation. A magnetic field has only two possible sources: an electric current or being “frozen-in” to perfectly conducting plasma. Since “electric current” is not in the standard-theory lexicon, astronomers must talk about frozen-in fields. But frozen-in fields only exist in perfectly conducting plasma, thereby requiring them to admit that the gas is actually plasma.

Furthermore, there is no evidence that perfectly conducting plasma exists. Everywhere there’s plasma, there’s radiation: the plasma is losing energy. The energy loss constitutes a load, that is, an impedance. Impedance is the inverse of conductance, so the presence of any impedance means that conductance is less than perfect. If you can see the plasma (you may need the help of a radio or x-ray telescope), it’s not perfectly conducting, and the electrical current that is making up the loss is generating the magnetic field. Standard theory is tongue-tied.

If astronomers have enough imagination to see seagulls, they could read up on plasma and see something beyond their gas.