Home Picture of the Day The Great Red Hot Spot 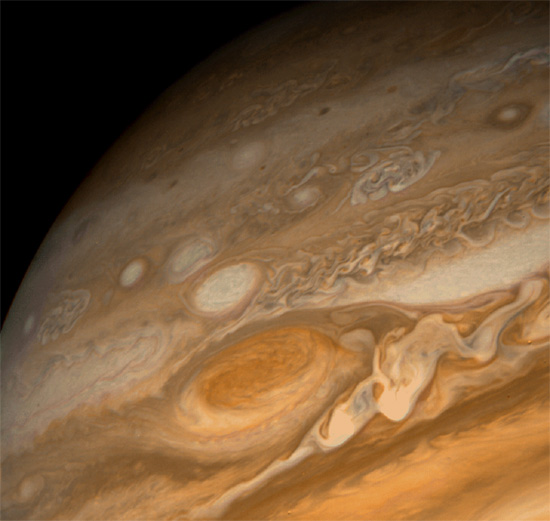 Is the famous gyre on Jupiter the result of atmospheric convection?

The red spot in Jupiter’s atmosphere has persisted for more than 300 years, at least as long as there have been telescopes on Earth able to see it. The consensus opinion is that it is a cyclonic storm driven by rising heat from below. However, exactly how it was formed and why it has persisted for so long remain a mystery.

The oval-shaped spot varies in size, from approximately 19,500 kilometers long to over 39,000 kilometers, with a maximum width of around 21,000 kilometers. In comparison, Earth is 12,800 kilometers in diameter. Wind speeds around its perimeter have been measured at 635 kilometers per hour, twice as fast as a terrestrial tornado.

Planetary scientists are not sure what causes its red color. In fact, they are not sure why the gas giant planets exhibit unique overall color schemes. Optical instruments reveal that Neptune has a blue color, Uranus a green hue, Saturn a pale yellow aspect, and Jupiter a rusty red appearance.

In March of 2010, the European Southern Observatory’s (ESO) Very Large Telescope detected variations in the temperature map of the spot. Observations revealed a warmer region at its center, corresponding to the deepest red color. “Warm” is a relative term, since the Great Red Spot’s temperature averages -160 Celsius.

Conventional investigators contend that the warmer areas in the center of the spot’s vortex are sufficient to drive its rotation as well as to turn that center a darker red than the rest of the spot. The red color’s origin—whether from chemical changes in the atmosphere or upwelling of other materials from below—requires further study.

From an Electric Universe perspective, Jupiter’s enigmatic markings, especially the Great Red Spot, could have a different origin altogether. Rather than from internally generated heat and convection, Jupiter’s turbulent atmosphere might be receiving its energy from an external source.

A previous Picture of the Day noted that gigantic “plasma tornadoes,” or flux tubes, have been found entering Earth’s magnetosphere from space. The flux tubes were discovered by the fleet of THEMIS satellites when they flew through the highly charged structures. The tubes were rotating at more than 1.5 million kilometers per hour and generating over 100,000 amps of electric current flow.

What the THEMIS satellites transected in space were multiply twisted electromagnetic fields, the characteristic signature of Birkeland current filaments. Electric fields, no matter how weak, initiate electric currents that, in turn, generate magnetic fields. The fields interact with magnetic fields generated by other currents, forming twisted pairs of filaments named after the one who originally discovered them, Kristian Birkeland. Birkeland currents follow magnetic field lines and draw charged material from their surroundings with a force that can be orders of magnitude greater than gravity.

Perhaps astronomers are witnessing the influx of plasma filaments into Jupiter’s electrically charged environment. In an image of Jupiter, several bright points can be seen surrounding the red spot in an arc-shaped array. Below the spot is another bright arc-shape, indicative of increased infrared radiation emissions.

Birkeland currents rotate around each other, beginning as many strands spinning around a common center in pairs. At first, there might be 56 filaments that merge into 28, then 14, and so on. As more current flows through the circuit, the number of filaments reduces, but each pair becomes more energetic. Where Birkeland currents intersect, z-pinch compression zones occur, glowing brightly as the plasma density increases, releasing abundant thermal (and other) radiation.

Rather than upwelling clouds of warm gas, the spot is probably rotating because external electromagnetic fields are influencing the atmosphere. The Great Red Spot, as well as other rotating vortices on Jupiter, could be where Birkeland currents impinge on the giant gas planet.