Home Picture of the Day Blasts of the Past, Part Two

Blasts of the Past, Part Two 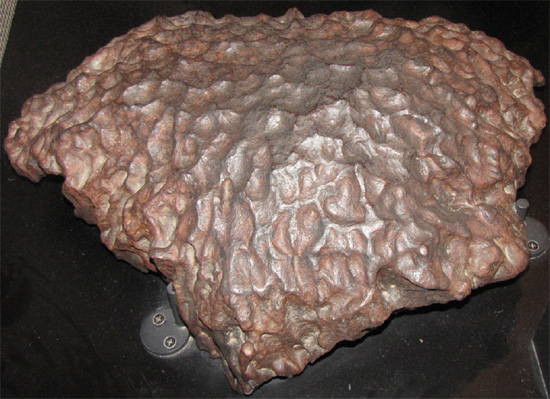 People at the headwaters of the Murray River, presumably of Wiradjuri stock again, remembered an occasion well before 1925 when a conspicuous fireball provoked an earthquake and a rupture of the earth’s surface:

“Then came a wonderful and inexplicable thing. It was a great bright light, burning blue, and travelling at an enormous rate. It came down out of heaven and no one knew who had caused it, but all believed that it must have been some sorcerer greater than any ever known. The earth trembled because of its speed. The air was filled with a hissing sound. The glare dazzled everybody, and in a fraction of time it had struck. The ground heaved and was rent. Stones went up, masses of earth flew, and a terrific explosion roared. The noise of the burst was deafening, and it reverberated around and amongst the hills and through the bush until all the world was just a great, full noise. … During the ensuing night more heavenly fires darted hither and thither. The frightened people grew somewhat accustomed to them and they watched them.”

The neighbouring Wadi Wadi, a subgroup of the Dharawal nation (Burragorang Valley, southeastern New South Wales), relayed an experience dwarfing the recent Russian event. At the end of an extremely hot day in the distant past, the sky and all its denizens appeared to shake:

“Then the sky moved. In the darkness, with just a shred of the red of the burning west left, and with the stars showing brightly, and a rising moon putting an inquisitive edge over the haze of the east, the sky heaved and billowed and tumbled and tottered. The moon rocked. The stars tumbled and clattered and fell one against the other. The Milky Way … also billowed and it split, and in some places is never joined together again, leaving blank spaces that we call ‘Magellan’s Clouds’.”

Unless these celestial bodies were directly affected, the most economic interpretation of this account appears to be the passage of a dense meteor shower producing optical distortion in the atmosphere. Then came the fireball, bursting into fragments that left permanent scars on the landscape:

“The great star-groups were scattered, and many of them, loosened from their holds, came flashing to the earth. They were heralded by a huge mass, red and glowing, that added to the number of falling stars by bursting with a deafening roar and scattering in a million pieces which were molten. The people were too scared to move. The disturbance continued all night. When the smoke and the clamour had died away and morning had dawned it was seen that the holes had been burnt into the earth, and great mounds were formed by the molten pieces, and many caves were made. The burning was still going on, for molten masses and flame were being belched forth.”

A storm of impacting meteors responsible for all this havoc must have been rare indeed. Yet even worse calamities come down from Australian lore. Polly Brown was a Barkindji (western New South Wales) who, sometime before 1927, told the hoary tale of a ‘fallen star’:

“AND THEY COULD SEE THE SKY WAS LIT UP … AND THERE WASN’T ANY MOON, SO THEY TOOK NOTICE OF THIS, AND THEY GOT SCARED … THEN THEY HEARD THIS RUMBLING NOISE FROM THE SKY, LIKE THUNDER … AND AS IT CAME DOWN CLOSE, THERE WAS RED STREAKS, AND A GREAT BIG BALL OF FIRE COMING DOWN … AND THERE WAS SMOKE …” (capitals and bold typeface in the original)

“AND A LOT OF THEM GOT TRAPPED … THEY JUST COULDN’T MOVE BECAUSE IT CAME DOWN TOO QUICK … AND WHERE IT FELL, SOME OF THEM DIED THERE, AND SOME OF THEM GOT BURNT … THERE WAS FIRE IN IT. … THE OTHERS DIED THERE. … THEY HAD TO MOVE QUICK BECAUSE OF THE RAIN THAT WAS COMING BEHIND.”

The fireball appears to have left a crater where it fell, on the river east of Wilcannia, at the third bend before Mount Murchison:

“THIS BIG CIRCLE OF ROCK IS WHERE THE STAR FELL. YOU CAN ONLY SEE IT WHEN THE RIVER DRIES UP. THE OLD PEOPLE CALLED THIS BEND ‘PURLI NGRANGKALITJI’ … THAT’S ‘THE FALLEN STAR’ IN PARKANTJI LANGUAGE.”

In the wake of the impact, the landscape was flooded:

“THEN IT STARTED TO RAIN … AND IT RAINED FOR DAYS … AND DAYS … AND DAYS … AND THEY KEPT MOVING, THIS GROUP OF PEOPLE … THEY HAD TO GET TO THE HIGHER GROUND. … ALL THE SWAMPS WAS FULL, THERE WAS JUST A SEA OF WATER EVERYWHERE. THERE WAS NO WAY THEY COULD HAVE A REST EXCEPT IF THEY FOUND A LITTLE ISLAND SOMEWHERE. … AUNTIE POLLY BROWN SAID ‘THAT’S WHY YOU’LL SEE FINGERPRINTS AND FOOTPRINTS IN THE ROCKS THERE TODAY … BECAUSE THEY WERE THE PEOPLE GOING UP AND COMING DOWN THESE HILLS; AND THE ROCKS USED TO BE SOFT.”

Moreover, the Barkindji discovered curious stones at the site of the impact:

“YEARS AGO, WHEN WE CAME OUT HERE, THERE WAS SOME DIFFERENT COLOURED STONE AS WELL AS WHAT YOU SEE NOW. THERE WAS A LOT OF BLACK STONE HERE … THAT SORT OF DULL BLACK LIKE YOU SEE IN OUR PEOPLE’S OLD FIREPLACES. AND IT HAD SHINY BITS LIKE BLACK MARBLE, TOO, AND BITS OF GREEN, AND BITS THAT WERE WHITE-ISH LIKE THE FAT IN A SHEEP.”

As discussed earlier, the description seems to match Australites, yet to suggest that this class of tektites was any more recent than 800,000 years is anathema to scientific consensus.

Have geologists examined the location fingered by the Barkandji? Did the Barkindji and the Wadi Wadi people refer to the same event? Could this be related to the Henbury crater (central Australia), which is associated with a meteorite impact dated to 4,200 years BP? And is there any way the Australites could be much more recent than commonly thought? With the paucity of available evidence, such questions understandably meet with a sonorous silence.

More extreme still is the well-known myth of the Greek demigod Phaethon, the ‘son of the sun’ whose bold adventure incinerated a large part of the world, while he himself crashed into the river Eridanus. Valerius Flaccus was a Roman poet (1st century CE) who envisioned Phaethon as a meteor, his charred remains a ‘black ball’ or ‘dark globe’ (ater globus). The Greek chronicler John of Antioch (7th century CE) similarly portrayed Phaethon as a ‘fiery ball’ (sphaira pyròs) hurled onto the Celtic lands from the sky with devastating consequences. As with the Barkandji, the event was associated with curious objects on the ground, amber in this case. A trickle of modern scholars has followed the interpretation of Phaethon as a meteor, but a definitive explanation of the myth has not yet emerged.

Many aspects of meteoric activity remain beyond our ken. The assumed coincidence that the explosion over Chelyabinsk occurred hours before the uneventful flyby of asteroid 2012 DA14 only underscores this. If pre-scientific records of the sky are allowed to shed some light on the phenomenon, perhaps the material presented above will blaze a trail and contribute to a boom in atmospheric studies.