Home Picture of the Day Saying is Believing 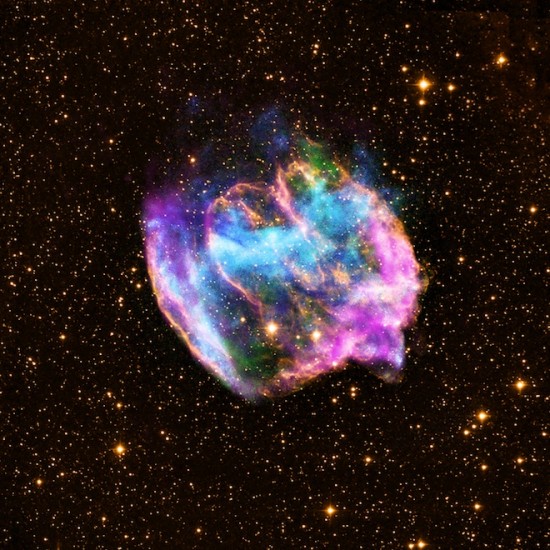 Is this an image of a supernova remnant around a black hole? An exploding double layer in a galactic circuit? A mythical creation event in another planetary system? An unnamed formation in an unimagined process? Theories and facts interdependently provide names for things; without a name, we may not even perceive the thing.

Stephen Toulmin noted in 1961 (Foresight and Understanding) “the continual interaction of theory with fact—the way in which theories are built on facts, while at the same time giving significance to them and even determining what are ‘facts’ for us at all….”

Considering that we can’t talk or write about something without naming it, this insight directly ties understanding to lexicon. The inevitable conclusion is Thomas Kuhn’s insight a year later (The Structure of Scientific Revolutions) that scientists with different “paradigms” (read: lexicons) will “practice their trades in different worlds.”

With this background and the Electric Universe (EU) lexicon for a contrast, I’ll deconstruct the press release for this image.

The object is a “distorted supernova remnant” in the consensus lexicon. “Distorted” is in contrast to what is expected from theory. The p.r. elaborates two paragraphs farther down: “generally symmetrical…evenly in all directions.” Theory’s influence on facts is illustrated by a Google images search for “supernova remnant”: many if not most of the images are “distorted” from expectations of spherical symmetry. The use of the adverb “generally” would seem to be an artifact of theoretical expectations.

The EU lexicon expects “generally” a bipolar quasi-symmetry. Side-on views of planetary nebulae often show cylindrical shapes with complex “cells of plasma” (“bubbles of gas” in the conventional lexicon). Images that appear circularly symmetrical are interpreted as “down the axis” views. In the EU, “supernova remnant” and “planetary nebula” are synonyms, varying primarily in their energy.

“Remnant” is a necessary adjunct to the theoretically prior “supernova explosions that destroy massive stars.” The assumption that gravity is the only force and mass is the only property of interest dictates that only words associated with ballistics and inertia can be used. Material apparently rushing away from a central location can only be the result of an explosion that gave the mass an impulsive force against gravity.

“Exploding double layer” (DL) are the words of choice for EU. The assumption that stars are formed and powered by external electrical forces dictates that words associated with instabilities in “Birkeland currents” be used. Especially relevant are those describing the interruption and expansion of current loops.

Supernovae are the result of a surge in the star’s supply circuit that catastrophically expands a star-wide DL. It’s a global instance of what in the consensus lexicon is called a coronal mass ejection (CME). Since electromagnetic forces are many orders of magnitude greater than the gravitational force, the words “gravity” and “mass” are of little significance in EU. Since the current loops respond to the electromagnetic forces at each moment and location, the glossary of ballistics and inertia are seldom consulted.

The p.r. doesn’t mention the separation of the material into strands. Strands are a minor feature in the consensus view and are the result of inhomogeneities in the “shock wave” from the explosion.

Such strands are “filaments” in EU, which is an important word. An EU p.r. would likely remark first on that aspect of the image. The “Bennett” or “z-pinch” effect will separate the expanding material—actually “current carriers”—into several narrow channels. The (electrically powered) acceleration of the star-wide DL, as well as the acceleration of charge carriers across the high electrical field of the DL, generate high velocities that mimic many of the effects of inertial shock waves.

The p.r. omits mention of the “braiding” in many filaments, especially in those along the axis. But other consensus accounts attribute it to “twisted magnetic field lines” that are “anchored” to “neutron stars” or “black holes.” Such an assertion is an antinomy in consensus theory: field “lines” are a pedagogical visualization device, similar to contour lines or lines of latitude. Magnetic fields are by definition continuous and closed. The imaginary lines cannot be anchored or twisted any more than they can be broken and reconnected.

In EU, braiding of Birkeland currents is a natural result of the electromagnetic forces in them that generate long-range attraction and short-range repulsion. The “right-hand rule” that describes the relation of magnetic field direction to the current that generates it requires two close currents to spiral around each other.

The p.r. does mention “neutron stars” and “black holes” as causes for the high-energy radiation that’s detected. They are artifacts of the “gravity only” assumption: When observers find that more energy is radiated than can be accounted for by the natural processes of gravitational attraction, they must invent supernatural concentrations of the gravitational force, which means super-mass and infinite density of matter. This is easily accomplished with a stroke of “mystical math” [in EU terms] that is unmoored from any empirical anchor.

The high energy is easily accounted for in EU because an exploding DL will draw in the energy of the entire circuit. It acts as a short in the circuit or breakdown in the current, much like a stroke of lightning. Significantly, the light-curves of supernovae mimic that of lightning: a sudden increase with exponential fading.

So which lexicon is to be preferred? Are they simply equal but different lexicons (“incommensurable” in Kuhn’s lexicon)? To compare the two is to compare apples with oranges: an established well-developed theory (with anomalies, patches, and antinomies) stands against a barely articulated one with little more than promises of fruitfulness. There is no “meta-scientific” ground for comparison. This would seem to be a position of relativism.

But there is an extra-scientific ground, a ground that keeps evolving: The consensus theory grew from the environment of mechanical technology and our biological senses. That environment has changed: Modern technology sends space probes with electronic sensors around the planets and into interstellar space; it expands our senses to include radio and x-ray “vision”; it has made us aware that the universe is composed of plasma. And it does so with the new knowledge of electricity. Problems in outer space turn out to be problems in inner space, in the space of our lexicons.

In the 1969 postscript to his 1962 essay, Kuhn remarked, “Later scientific theories are better than earlier ones for solving puzzles in the often quite different environments to which they are applied. That is not a relativist’s position….”

I absolutely prefer a lexicon of promises.