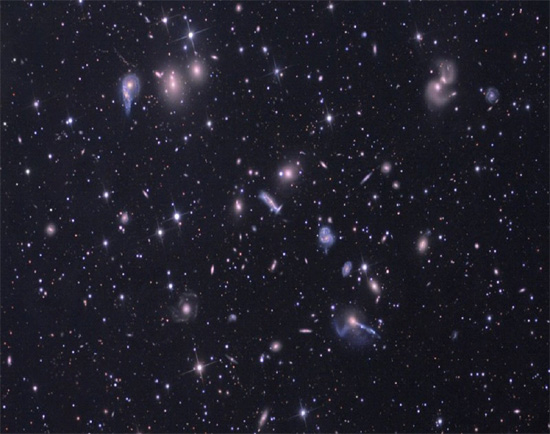 Galaxy clusters such as Abell 2151 in the constellation Hercules are powerful X-ray emitters.
Credit: Tony Hallas

What takes place in thunderstorms on Earth is most likely a smaller version of large scale phenomena.

“I have always believed that astrophysics should be the extrapolation of laboratory physics, that we must begin from the present Universe and work our way backward to progressively more remote and uncertain epochs.”

Previous Picture of the Day articles discussed electric fields that build up in and around thunderstorms. Since Earth is electrically charged, it maintains an electric field at its surface of between 50 and 200 volts per meter. In other words, for every meter of altitude the voltage increases by that measure.

Electromagnetic fields beneath thunderstorms increase to 10,000 volts per meter because the storms and the Earth act like the plates of a capacitor, storing electrical energy from the surrounding environment. A “wind” of charged particles blows toward the developing storm, pulling neutral air molecules along with the current, creating powerful updrafts that can occasionally rise into the stratosphere. Once the storm reaches a critical threshold, the stored energy is released as a lightning bolt.

Thunderstorms act like “particle accelerators,” launching massive discharges upward to space, as well as downward to ground. The upward strokes are known as red sprites and blue jets but are not easy to detect, since they last just a few milliseconds and are at high altitude.

Red sprites are massive, diffuse flashes above active thunderstorms, coinciding with normal lightning strokes. They can be single events, or multiple, with filaments above and below, often extending to altitudes close to 100 kilometers. Some of the largest sprites contain dozens of individual smaller sprites, covering horizontal distances of 50 kilometers, with a volume of 10,000 cubic kilometers.

Blue jets are distinct from sprites, since they propagate upward in narrow cones that disappear at an altitude of about 50 kilometers. They are also more powerful because the electric discharges are confined within a smaller spatial volume. Geophysicists are beginning to realize that sprites and jets are part of every moderate to large storm system and are an essential component in Earth’s electric circuit.

Electric Universe theorists propose that what is observed on other planets, within galaxies, or in free space should be used as examples of what can occur on Earth, as opposed to using our planet to model the Universe. We are part of a cosmic “ecology” that maintains a coherent physical aspect, so that aspect ought to apply here.

The European Space Agency’s (ESA) International Gamma-Ray Astrophysics Laboratory (INTEGRAL), was launched from the Baikanor Cosmodrome on October 17, 2002. It is the first space-based observatory that can be used to simultaneously study objects in gamma ray, X-ray, and visible light. One of INTEGRAL’s major finds was the observation in 2008 of an extreme X-ray source from the center of a remote galaxy cluster.

X-ray emissions are far too intense to be generated from hot gas in the cluster, so “shockwaves must be rippling through the gas.” Astrophysicists suggested that the shockwaves had “turned the galaxy into a giant particle accelerator.”

The temperature of gases in the cluster core was measured at 100 million Kelvin. Researchers think that electrons accelerated by shockwaves traveling through the cluster gas generate the intense X-rays. The shockwaves are said to be created when two galaxy clusters “collide and merge.”

By referring to material with a temperature of 100 million Kelvin as “hot gas,” ESA scientists are highlighting their complete ignorance of plasma and its behavior. No atom can remain intact at such temperatures: electrons are stripped from the nuclei and powerful electric fields develop. The gaseous matter becomes plasma, capable of conducting electricity and forming double layers.

Nobel laureate Hannes Alfvén maintained that double layers are a unique celestial object, and that intense X-ray and gamma ray sources could be due to double layers “shorting out” and exploding. Double layers can accelerate charged particles up to enormous energies in a variety of frequencies, forming “plasma beams.” If the double layer breaks the circuit, the double layer may explode, drawing electricity from the entire circuit and discharging more energy than was contained in the double layer.

Double layers dissipate when they accelerate particles and emit radiation, so they must be powered by external sources. Birkeland currents are theorized to transmit electric power over many light-years through space, perhaps over thousands of light-years, so they are most likely the power source for the extreme X-ray generator in Ophiuchus.

So-called “particle accelerators” in thunderstorms and galaxy clusters are most likely manifestations of Birkeland currents pouring electricity into double layers. Sprites and jets exhibit filamentary structure, as does terrestrial lightning. Streamers of plasma can be seen flowing through galaxy clusters. In time, it may become evident that the scaleable nature of the plasma Universe reveals itself through electrical events both large and small.