Home Picture of the Day Organic Molecules in Space 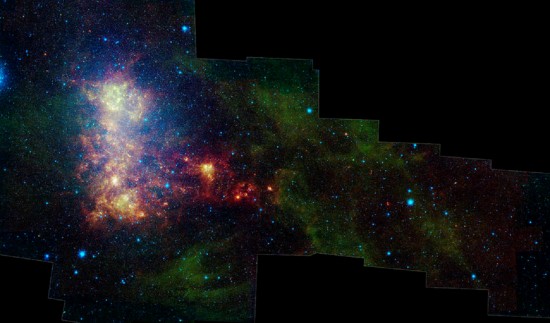 What do a planet-sized, frigid moon and a small galaxy have in common?

The Magellanic Clouds consist of two dwarf galaxies in proximity to the Milky Way. According to astronomers, they are orbiting our galaxy and might have once been part of it.

The Small Magellanic Cloud (SMC) is approximately 200,000 light-years from Earth, as astronomers gauge distance, and is no more than a smudge of light to the naked eye. Both galaxies were first seen by the European explorer Ferdinand Magellan during his global circumnavigation in 1519. The people of Australia have known about their existence for thousands of years, however.

According to astronomers from the Spitzer Space Telescope team, the SMC is interesting because it “is very similar to young galaxies thought to populate the universe billions of years ago.” A lack of heavy elements—20% of those found in the Milky Way, for example—leads then to conclude that its stellar population has not had time to transmute the hydrogen in their thermonuclear cores into nitrogen, carbon, and oxygen, the “elements of life.”

In the false-color image at the top of the page, infrared data from Spitzer’s supercooled detectors is highlighted according to light frequencies: blue reveals what are thought to be older stars, green indicates organic dust streams, composed of “tholins” flowing in and around the SMC, and red relates to hypothetical star-forming dust clouds, or proplyds.

Tholins are large organic molecules found outside our planet that arise when ultraviolet light interacts with smaller molecules. They cannot exist naturally on Earth, because the atmospheric oxygen would quickly destroy them. They can be synthesized in laboratory isolation, however, by sending electric arcs through various combinations of methane and ammonia.

Tholins are primarily a rusty color, which could help to explain the reddish-orange hue of Titan’s atmosphere, where there is almost no oxygen. The Cassini spacecraft, currently in orbit around Saturn, detected “large molecules” when it flew within 800 kilometers of Titan’s surface. The molecules remain unknown, however, because Cassini does not carry the necessary instruments to identify them.

It is not a coincidence that electric arcs are used to create tholins in the laboratory. The Huygens probe found high concentrations of charged particles in the lower atmosphere of Titan, so intense electrical activity could have been responsible for the formation of organic molecules there, as well. Perhaps the reddish-brown “soot” that covers several of Saturn’s moons also contains tholins.

Close examination of the Stream’s formation reveals it to be filamentary. As has been noted in past Picture of the Day articles, filaments in gas clouds are a sign of electric currents flowing through dusty plasma. The current flow creates vortex structures that gradually morph into distorted wisps and curlicues of glowing matter. The distorted filaments have been observed in laboratory experiments, as well as in Earth’s aurorae, and other planets, such as Jupiter.

Stars, galaxies, and planets are all moving through plasma in space and are affected by electric currents. Whether great streams of intergalactic plasma, electric arcs in the laboratory, or lightning discharges between planets, the observations all point to electricity as the active agent.