Home Picture of the Day Seeking What is Hidden

Seeking What is Hidden 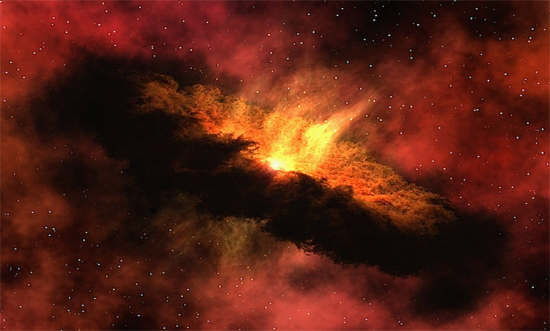 Artist’s illustration of a hypothetical dust ring around a star. Credit: NASA/JPL-Caltech

What happened to the ring of dust circling TYC 8241 2652 in the constellation Centaurus?

A recent press release expresses surprise and confusion about the absence of a stellar dust ring that seems to have vanished without a trace. What is most surprising to astronomers is that the ring performed this disappearance in a way contrary to any expectations. If dust clouds are to go missing from observations, they should do so in an orderly fashion.

A dusty ring around the relatively nondescript star was observed for the first time in 1983 by the Infrared Astronomical Satellite (IRAS). IRAS looked at the sky in infrared wavelengths of 12, 25, 60, and 100 microns. This means that it was sensitive to both mid and far-infrared frequencies. As the temperature of an object cools, it glows in longer infrared wavelengths, so some infrared wavelengths are better suited for seeing certain objects.

At the 5 to 40 micron range (mid-infrared) planets, asteroids, comets, and dust “warmed by starlight” is visible. Those light frequencies correspond to temperatures of minus 173 Celsius to approximately 460 Celsius. In the case of TYC 8241 2652, the dust was measured to be about 180 Celsius.

What is puzzling the astronomers is that observations by other instruments can now detect no dust around the star. Ben Zuckerman of UCLA said: “The dust disappearance at TYC 8241 2652 was so bizarre and so quick, initially I figured that our observations must simply be wrong in some strange way.”

What is wrong is not the observations.

There are major assumptions involving observational data. In order for observations to make sense, they must exist within the framework of a theory. A “theory” is simply an assumption or a presupposition. In the Electric Universe, for example, there is an assumption that electricity flows through space, and that plasma is the dominant form of matter.

In the case of the missing dust, the assumption is that the material was heated by thermal energy transmitted from the stellar atmosphere, as well as by collisions between some putative proto-planets. Since the glow from that heated dust is now invisible to infrared detectors, the ring structure must have vanished.

As the press release states, the two solutions proposed by astronomers are not satisfying, even to them. One is that the dust was drawn into the star. Another is that the dust was battered into such small pieces that it became transparent to the detectors on NASA’s Wide-field Infrared Survey Explorer (WISE). Both scenarios should take much longer than the reported two year timespan.

In an Electric Universe, stars are not the thermonuclear fusion engines that consensus theories assume. Rather, plasma and magnetic fields form electric stars through enormous, diffuse Birkeland currents. Such structures prevent plasma from dispersing inside their light-years long helical coils. When the electric current density inside the filaments gets high enough, the plasma that carries the current begins to glow and to “pinch” into plasmoids that eventually become stars.

This means that what occurs near stars must be considered electrically, and not simply on the basis of heat, light, and kinetic events, alone.

When plasma moves through a dust or gas, the cloud becomes ionized and electric charges flow. The currents generate magnetic fields that confine themselves into coherent filaments. Charged particles that compose the currents spiral along the magnetic fields, appearing as electrical vortices.

Around the loci of stellar z-pinches, toroidal plasmoids can get “pumped” with energy. Excess input power might push them into a “glow mode” discharge. In other words, the dusty plasma ring around TYC 8241 2652 was probably electrically energized, and not just heated up by stellar radiation.

Electric stars aren’t begotten in nebular clouds, their progenitor is charge separation. Everything we see in the Universe is ionized to some degree, therefore it is plasma. According to Electric Universe theory, the definition of “plasma” is not the conventional one of “ionized gas.” It is that confused apprehension of plasma that falls back on ideas about gas behavior and thermal effects. Gravity, density, compression, and mechanical phenomena give way to plasma physics.

It is the capacitive, resistive, and inductive electrical environment in and around stars that causes the materials to change in brightness. Therefore, the plasma torus generated by TYC 8241 2652 is most likely no longer energetic enough to be visible to our instruments. It is possible that the falloff of electric power caused the ring to switch off.