Home Picture of the Day Another Year 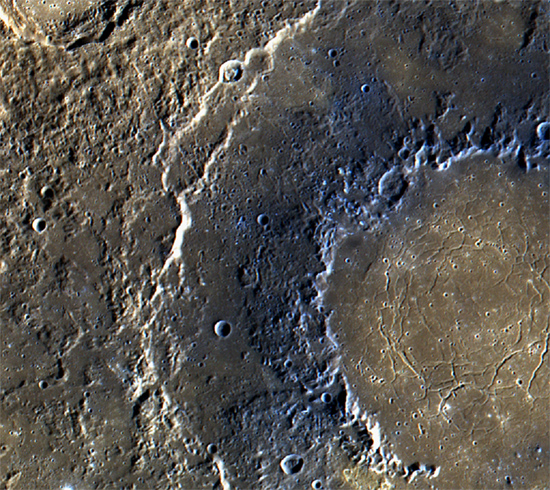 The MESSENGER spacecraft has recently been approved for an extended mission in Mercury orbit.

Mercury’s geology is intriguing to planetary scientists because it provides them with a number of “mysteries” and “processes that have yet to be understood”. Chains of craters and melted pits extend outward from terraced depressions; their flat bottoms and the vertical sidewalls are signs that they were created by electric discharge processes, rather than meteor impacts on the surface.

Although asteroids hitting Mercury is not an unreasonable theory, the signature of electrical activity is more prevalent than evidence for kinetic shockwaves through the strata. Most of the debris on the surface of Mercury appears to be chunks of fallback material that was blown out by the explosive energies of plasma discharges.

For example, many craters on Mercury, such as Fonteyn, are surrounded by bright linear deposits called “rays.” The rays are reminiscent of those that radiate outward from Tycho, a giant crater on Earth’s Moon.

Tycho and Fonteyn are similar in their morphology, although Tycho is approximately 85 kilometers in diameter while Fonteyn measures 29 kilometers. Just like Tycho, Fonteyn crater possesses a mountainous formation in the center. Fonteyn’s rays also exhibit chains of small craters that are aligned with the ray structure, indicating their nonimpact related formation. If they are where small blocks of debris that fell back to Mercury after an explosive event, they are remarkably arranged.

Crater chains abound on Mercury. A close examination reveals many of them to be woven together in patterns that crisscross and braid themselves over and under one another. They all lie along the path of flat-topped mesas that rise above deep chasms cutting across the landscape without regard to the elevation. Many times the chasms slice right through the middle of a crater and its central mountain peak.

Mercury is also home to some of the largest basins in the Solar System. Rachmaninoff basin (shown at the top of the page) is 290 kilometers wide, the same as Shakespeare basin. Rembrandt is over 700 kilometers across. Caloris basin takes the prize for the largest basin with an outer ring diameter of more than 1550 kilometers in diameter. What is most unusual about the large basins on Mercury is their multi-ring structure.

When electricity encounters a solid body, it erodes material from the surface. The pits eroded by electric arcs are usually circular because electromagnetic forces constrain the arc to strike at right angles. Since an electric arc is composed of two (or more) filaments rotating around a common center, the surface is excavated by a plasma “drill bit,” leaving steep sides and a “pinched up” rim of debris.

Electric currents can appear in three modes: dark, glow and arc, depending on the voltage and charge density. The arc mode, which has a very high charge density, is used for precision machining in metal.

The degree of current filamentation depends on the density of the medium through which the current passes. With similar current flows, one passing through a vacuum (or a thin atmosphere) produces a columnar channel that spins around its axis. In the glow mode, this channel looks like a tornado of fire. The same current, if it travels through a thick atmosphere, branches into filaments. These filaments form concentric circles around the primary axis.

If the filaments are sufficiently separated, the bottom of a crater, as the material is removed, will be electrically heated, possibly burned, and then melted flat. This explains why so many of the inner regions of multi-ringed formations are dark. The abundance of small craters that appear on the rims of larger rings testifies to the probability of electric arc discharges. If craters overlap, the result is a steep-sided trench with scalloped edges. An arc can cut a trench and then jump some distance away before cutting another one.

Rays, central peaks and flat floors are not only peculiar to craters observed on Mercury. Concentric rings on Jupiter’s moon Callisto, Saturn’s moon Tethys, as well as our own Moon testify to electric discharge machining.

Regarding EDM effects on planetary bodies, especially Mercury, Electric Universe theorist and author Wal Thornhill wrote: “In the case of the interplanetary thunderbolt, we are talking about billions of amperes [giga-amperes]. Such a powerful current will magnetically ‘pinch’ down to produce circular ringed craters and features like Caloris…The pattern of ‘fractures’ on the floor of Caloris basin is similar to the radial and concentric discharge patterns seen in the dense plasma focus device where the discharge current is forced to flow radially between two concentric conductors.”

Taken together, it is more likely that Mercury’s strange terrain is not so strange after all. What appears unusual to the consensus scientific community is readily explicable if electricity is considered to be one of the forces involved.