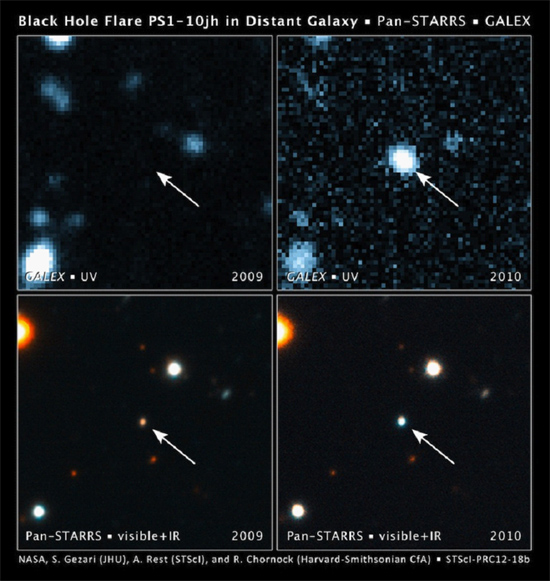 Supposed black hole causes a flare in the nucleus of a distant galaxy. Credit: NASA/JPL-Caltech/JHU/STScI/Harvard-Smithsonian CfA

Problematic black hole physics is in the news again.

In a recent press release from the Galaxy Evolution Explorer and the Pan-STARRS1 telescope in Hawaii, astronomers announced “direct evidence” for the existence of a supermassive black hole (SMBH) in another galaxy. The high frequency ultraviolet spectrum, as well as the infrared light from the two detectors, seems to indicate the “shredding” of a star near the center of a galaxy 2.7 billion light-years away.

Black holes have been discussed many times in previous Picture of the Day articles. They owe their existence to mathematical legerdemain, and can have nothing to do with the substantive Universe because they are said to occupy a region where the laws of space and time break down.

Black holes are said to cause space and time itself to twist and warp so that the past becomes the future and velocity calculations yield impossible solutions. According to standard theories, matter inside of a black hole occupies no volume at all, yet retains gravitational acceleration so great that not even light can escape its attraction—thus they are “black” holes because they cannot be detected with optical telescopes. Although they are impossible to observe directly, over 90% of galaxies in the Universe are supposed to harbor these perilous maws

The terminology used by astrophysicists to describe black holes is highly problematic, relying on “explanations” derived from loose interpretations. Ambiguous labels such as space/time, singularities, infinite density, and other ideas that are not quantifiable have introduced irony into what should be a realistic investigation into the nature of the Universe.

According to Suvi Gezari, an astronomer from Johns Hopkins University, “When the star is ripped apart by the gravitational forces of the black hole, some part of the star’s remains falls into the black hole, while the rest is ejected at high speeds. We are seeing the glow from the stellar gas falling into the black hole over time.”

NASA’s Chandra X-ray Observatory also looked at the hot material in order to see if it matched the emissions normally seen in an “active galactic nucleus”. Their results indicated that the spectrum observed by Gezari’s group did not conform to those prior observations.

Flares and X-ray jets spewing from galaxies are thought to be caused by stars traveling too close to their central supermassive black holes where they are torn apart by tidal forces. Most of the star’s gas escapes the black hole, but a small quantity is captured by the immense gravity and forms a rotating disk. Closer to the black hole, heat generated by molecular collisions tears the atoms apart and the disk of gas glows in extreme ultraviolet and X-rays. When matter eventually falls into the black hole, gamma rays can also explosively burst out.

X-rays in space are not created in gravity fields. Laboratory experiments most easily produce them by accelerating charged particles through an electric field. No gigantic masses compressed into tiny volumes are necessary and they are easily generated with the proper experimental models.

To say that gas can be heated by gravity until it emits X-rays indicates a serious lapse on the part of the GALEX research team. Molecules of gas cannot remain intact at million degree temperatures because electrons are stripped from the atomic nuclei, causing them to become ionized. Instead of hot gas, the galactic radiation should be referred to by its proper name: plasma.

An electric current in plasma generates a magnetic field that constricts the flow of charge. The constricted channel is known as a Bennett pinch, or z-pinch. The “pinched” filaments of electric current remain coherent over large distances, spiraling around each other, forming helical structures that can transmit power through space.

As we have noted in the past, Hannes Alfvén identified the “exploding double layer” as a new class of celestial object. It is double layers in space plasmas that form most of the unusual structures we see. Stellar explosions, jets, rings, and glowing clouds—these are all examples of electricity flowing through dusty plasma confined within Birkeland currents that stretch across the light years.

Retired Professor of Electrical Engineering Donald Scott, author of The Electric Sky, wrote about the way plasma acts in the Universe: “Plasma phenomena are scalable. Their electrical and physical properties remain the same, independent of the size of the plasma. In a laboratory plasma, of course, things happen much more quickly than on, say, galaxy scales, but the phenomena are identical—they obey the same laws of physics. In other words we can make accurate models of cosmic scale plasma behavior in the lab, and generate effects that mimic those observed in space. It has been demonstrated that plasma phenomena can be scaled to fourteen orders of magnitude. (Alfvén hypothesized that they can be scaled to 28 orders or more!) Electric currents flowing in plasmas produce most of the observed astronomical phenomena that remain inexplicable if we assume gravity and magnetism to be the only forces at work.”

Irrespective of their source, X-rays in space are not created by gravitational fields regardless of how strong they are theorized to be. Since plasma is composed of charged particles, the particles are accelerated by electric currents and spiral in the resulting magnetic fields, creating synchrotron radiation that can shine in all high energy frequencies, including extreme ultraviolet, X-rays, and gamma rays.