Home Picture of the Day The Amazon Rainforest 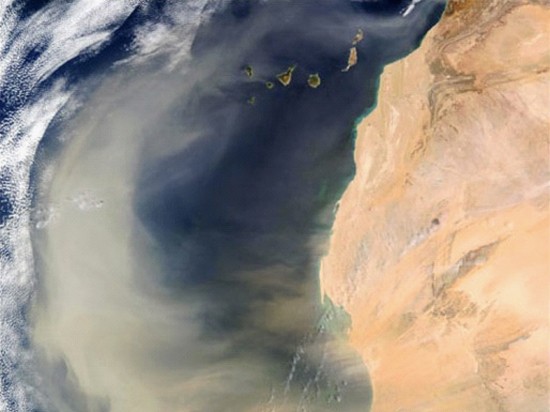 Could the Amazon rainforest be only a few thousand years old?

The Amazon Rainforest is a moist broadleaf forest that covers most of the Amazon Basin of South America. This basin encompasses seven million square kilometers (1.7 billion acres), of which five and a half million square kilometers (1.4 billion acres) are covered by lush green rainforest. Over half of the rainforest is located in Brazil but it is also located in other South American countries including Peru, Venezuela, Ecuador, Colombia, Guyana, Bolivia, Suriname and French Guiana. The Amazon represents over half of the planet’s rainforests, comprising the largest and most species-rich tract. It is home to half of all life on the planet.

The barren Sahara desert – the lifeblood of the Amazon rainforest

The satellite image above shows veils of fine dust lifting off the sands of the Sahara. It is a regular phenomenon that occurs around noon each day. Countless particles of desiccated plankton dust fill the air, forming a giant dust storm many kilometres wide. More than half of this is believed to be from the Bodélé depression, an ancient lakebed in the Sahara. This huge cloud is blown across Africa and after crossing the west coast the dust is drawn upwards high into the sky. It then begins an epic journey across the Atlantic propelled by the prevailing wind. It is estimated 54,000 tons of desert dust flow from Africa to South America every day.

The minerals in the dust dissolve into water droplets and fall on the Amazon as rain. In this way, a staggering 40 million tons of African desert dust is delivered to the Amazon every year. Without this remarkable arrangement in nature the Amazonian rainforest – with all its plant and animal life, and all its astounding biodiversity – could not exist as we know it.

The Amazon rainforest is believed to be one of the oldest living systems on the earth – about 55 million years old. Herein lies a big problem. The numbers just don’t add up!

The very recent formation of the Sahara desert

The vast Sahara desert (almost as large as the US) wasn’t always a vast desolate ocean of sand. Around 5,000 years ago it was a very different terrain. It was a sub-tropical paradise where deer, hippos and elephants were hunted and giraffes and rhinoceros roamed the area. With a plentiful supply of food, thousands of hunter-gatherers flocked to live in this lush savannah. North Africa was once teeming with people. What happened to this lush green world? Where did all the sand in the Sahara come from?

Recent studies have suggested the Sahara gradually shifted from savannah 6,000 years ago to its now vast oceans of sand about 2,700 years ago. In a previous TPOD it was suggested that the iron rich sands were extraterrestrial in origin. It was reasoned that as sand takes tens of thousands, if not millions of years to form (Saharan sand believed to be seven million years old), it would be absolutely impossible for such a colossal amount of sand to form in what is the blink of an eye in geological terms – an exterrestrial source providing a very plausible solution.

Either way the fact is the Sahara desert didn’t exist 6,000 years ago. This raises the most obvious question; how can the Amazon rainforest be 55 million years old if the Sahara is only a few thousand years old? How is it possible for a desert that until recently didn’t exist, sustain a tropical rainforest thousands of kilometers away for 55 million years? Using scientists own dates it makes no sense whatsoever, it doesn’t add up. The Amazon rainforest with all it its diverse plant and animal life, can only be a few thousand years old.

In light of the above perhaps the ‘millions of years’ dates so often ascribed to many of Earth’s geological features such as mountain ranges, ice caps, volcanoes, rivers and land masses should also be called into question. Maybe much of what we see today has been shaped by some very recent catastrophic events in the heavens.