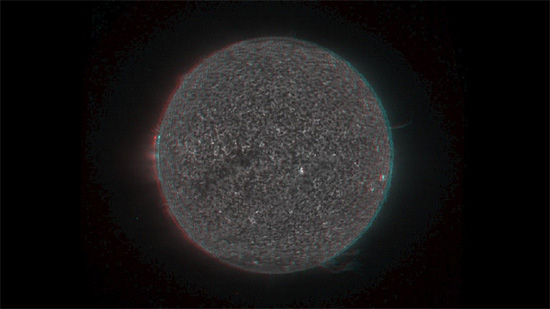 A 3D image of the Sun in ionized helium light (17.5 nanometers) Credit: NASA

The time has come to let the thermonuclear Sun theory go.

Everything has a natural explanation. The Moon is not a god, but a great rock, and the Sun a hot rock.
— Anaxagoras, Greek philosopher circa 550 BCE

Hypothetically, how does the Sun produce heat and light enough to sustain life on our planet at a mean distance of 149,476,000 kilometers? It is apparently not a hot rock, so what is it?

According to spectrographic analysis, the Sun is composed primarily of hydrogen gas (71%), with 27% helium and the remainder thought to be minute percentages of oxygen, nitrogen, sulfur, carbon, and six other elements. Although every element on Earth can be seen in a spectrogram of the Sun, those 12 make up 99.9% of its mass.

The Sun is 1,390,000 kilometers in diameter, with a mass approximation of 1.98 X 10^30 kilograms, although that figure is speculative. The temperature measured at its surface is 5575 Celsius and is estimated by conventional heliophysicists to be as high as 15,600,000 Celsius in its core. As standard models suggest, the Sun must generate outward radiation pressure or gravity would compress it into a relatively tiny ball. The theory states that an energy source must exist inside the Sun, acting as a counter force to gravitational contraction.

The thermonuclear Sun came about because it seemed to Sir Arthur Eddington in his classic work, The Internal Constitution of the Stars, that only nuclear fusion could produce radiative energy sufficient to prevent the Sun from collapsing “under its own weight”. Since the processes by which scientists describe those fusion reactions were not mathematically modeled until years after Eddington’s theory, it was more a statement of faith at the time than it was a result of experimental research.

Supposedly, when the Sun condensed out of the nebular cloud that was its nursery, the gases were compressed by gravity without losing much heat to space so that the core could reach a temperature greater than 10 million Celsius. At that temperature, hydrogen atoms are thought to be disrupted into individual protons and electrons, leaving the protons free to collide with one another. It is these initial proton collisions, it is said, that are the first step in a reaction called the proton-proton (p-p) chain.

According to theory, when protons collide at those high temperatures, they are moving fast enough to fuse into other particles: deuterium, a positron and a neutrino. Deuterium is a proton-neutron combination, while a positron is a positively charged electron. Neutrinos are similar to electrons, except they do not carry an electric charge, and are almost massless. Being neutral, they are not affected by the electromagnetic forces that affect electrons.

The second stage in the p-p reaction is the formation of a helium-3 nucleus when the deuterium captures another proton, while at the same time emitting a gamma ray. A helium-4 nucleus and two neutrinos are the end results of the reaction, although it can follow one of many different reaction paths.

In reality, as Electric Universe theorist Wal Thornhill points out, stars reside within plasma sheaths perhaps as great as a light-day in extent. They are the borders between theelectrical influence of the stars and the currents flowing through the galaxy.

“The Sun’s plasma sheath, or ‘heliosphere’ is about 100 times more distant than the Earth is from the Sun. To give an idea of the immensity of the heliosphere, all of the stars in the Milky Way could fit inside a sphere encompassed by the orbit of Pluto. The Sun’s heliosphere could accommodate the stars from 8 Milky Ways! It is clear from the behavior of its relatively cool photosphere that the Sun is an anode, or positively charged electrode, in a galactic discharge.”

As Donald Scott describes, the Sun is controlled electronically via a transistor-like effect. This explains several phenomena not included in thermonuclear theory:

1. Why coronal hotspots appear in the lower corona above sunspots.

2. Why the corona changes shape from times of active to quiet Sun.

3. The solar wind’s flow rate depends on the voltage (energy) rise from the Sun’s interior up to the photospheric tufts.

4. The initial velocity (and temperature) of the solar wind ions depends on the voltage (energy) drop from the tufts down to the lower corona.

5. That transistor action can cut off the solar wind flow.

The stars receive their power from outside, not inside. Any nuclear reactions are taking place on the surface of the Sun and not in its core. The solar wind is an electric current connecting the Sun with its family of planets and with its galactic clan, so the 90-year-old theory of fusion firing the solar furnace needs to be reexamined.

2 Lectures by David Talbott According to author David Talbott, all of human history can be seen as just two stories. First, came the story of ancient mythology, when towering gods were said to have ruled the world. Then came the story of science, emerging from a growing distrust of the myths and a new emphasis on direct observation and reason. But a third story is possible, according to Talbott, one that sees the underlying provocation of the myths in extraordinary electrical events occurring close to the Earth. To be believed, a third story must be more coherent and more meaningful than either archaic religious mythologies or the modern mythologies of popular science.