Home Picture of the Day Tiwanaku 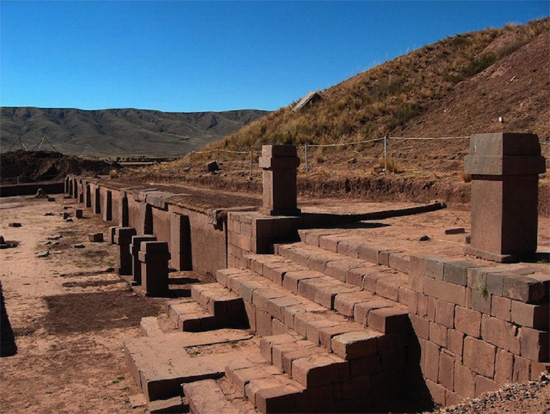 Did this ancient site experience a catastrophic end?

Tiwanaku, or Tiahuanaco in Spanish, is a ruined citadel occupying almost 10 square kilometers in the Bolivian Andes at an altitude greater than 3800 meters. Carbon-14 dating methods suggest that the site is no more than 3700 years old. However, as previous Picture of the Day articles discuss, radiometric dating is, at best, an unreliable system for establishing age.

According to the book, Tiahuanaco, The Cradle of American Man by University of La Paz Professor Arthur Posnansky, Tiwanaku is closer to 17,000 years old, perhaps one of the oldest surviving human habitations on Earth.

Posnansky based his estimate on the alignment of the Kalasasaya temple stones. “Kalasasaya” means “standing stones” and refers to the large stone pylons apparently aligned deliberately around a central courtyard. The current temple is a reconstruction and does not reflect the original architecture that the pre-Incan inhabitants intended. There was no wall between the standing stones as there is today.

Many ancient civilizations used astronomical alignments in their structures. Norse burial mounds were made with apertures that allowed a shaft of sunlight to shine into their deepest recesses on only one particular day of the year: usually the winter solstice. The inhabitants of Chaco Canyon built rock buttresses with slots in them set up so that a beam of sunlight could pierce the heart of a chiseled spiral petrogram on the summer solstice. The walls of many Chaco Canyon buildings are also lined up with the sunrise and sunset on specific days of the year.

Posnansky’s research over several decades showed him that the alignments in Tiwanaku were offset from what should have been “true” positions. Instead of being sited to the south, some of them were slightly offset to the southwest. According to Posnansky, that offset indicated that the site lines were from a time when the stones were aligned with true south.

Earth’s poles are tilted with respect to the plane of the Solar System, creating an angle called the “obliqueness of the ecliptic”. The present tilt is 23 degrees and 17 minutes. According to consensus astronomers, it does not always remain so. Our axis supposedly oscillates between two extremes: from 22 degrees and 1 minute to 24 degrees and 5 minutes. This oscillation cycle is said to require 41,000 years. Posnansky’s alignment data was checked by several astronomers who concluded that the temple stones were set up when Earth’s axis was tilted at 23 degrees, 8 minutes, 48 seconds, indicating a timeframe of approximately 17,000 years ago.

There is another explanation for the offset alignments. Rather than an oscillation of Earth’s axis, our poles could have experienced a one-time displacement as a result of some momentous episode in the recent past. Some of the strange anomalies that exist in the Tiwanaku region might be explained by such an Earthshaking catastrophe.

Tiwanaku’s location is problematic when it comes to living conditions. It is a scorched desert in the summer months, while it is bitterly cold in the winter. Common food crops cannot be grown in the present environment. How did the native population sustain itself? How did they manage to live there while they erected the megalithic structures built from stones weighing hundreds of tons?

The Puma Punku or “Door of the Puma,” contains scattered stones weighing between 100 and 150 tons, with one stone weighing almost 440 tons. The nearest quarry from which the gigantic blocks could have been cut is over 15 kilometers away. Another example, the Gateway of the Sun, is a single 10 ton block of Andesite granite. It was found on the site buried in mud and cracked down the middle.

Tiwanaku appears to have been a port city, as well. However, Lake Titicaca, the only body of water, is almost 20 kilometers distant. There are piers and wharfs in Tiwanaku with long, straight calcium deposits that indicate prehistoric water lines, although they no longer lie in a horizontal plane, they are slanted. There are millions of seashells in the area, as well. Lake Titicaca, itself, is a salt water inland sea that is rapidly shrinking. Its fossilized shorelines are also dramatically tilted. Abundant sea life still thrives in Lake Titicaca, instilling a presumption that it was once part of the ocean.

Perhaps some cataclysm changed the very foundations of the Earth on which Tiwanaku was founded, uplifting it and its surroundings by hundreds or thousands of meters. Such an occurrence would change the climate, shake the city to pieces, tilt the lake, move the shorelines, and leave millions of shellfish stranded in the dry air. As these pages have repeatedly suggested, at some time in the recent past Earth and its neighbors were involved in a catastrophe that altered their appearance and their environments. Tiwanaku most likely exemplifies the results of that past disaster.