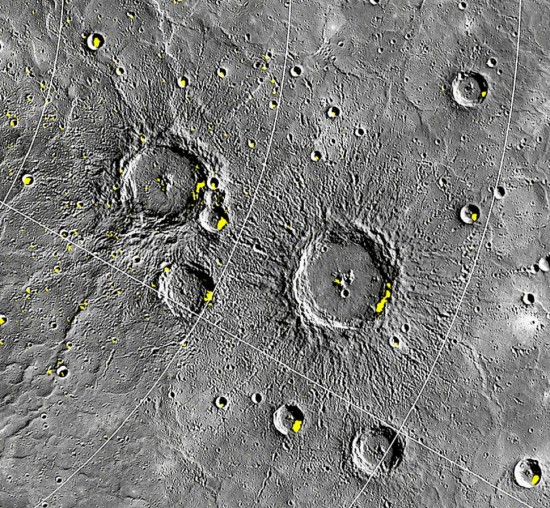 Mercury’s story is probably a complicated tale of extremes. The planet’s surface is heavily scarred, with steep-walled canyons, scarps that rise up several kilometers, and craters that penetrate the crust for several kilometers below the mean elevation. The difference in elevation between lowlands and highlands exceeds eight kilometers in some regions.

Mercury resembles the Moon more than any other body in the Solar System. The Moon is 3475 kilometers in diameter, while Mercury is 4880 kilometers, but it appears that they both experienced catastrophes at some time in the past that left them with nearly identical topography.

In the image at the top of the page, the two largest craters demonstrate nearly identical formations, except they are more pronounced. The braids are well defined, the crater chains are more sharply etched, and they extend for a greater distance. Other interesting features are the ridges that look like flames surrounding the crater rims. It might be that fallback debris could have excavated the crater chains but there is no impact scenario that can explain the sinuous slopes that connect the large craters.

How does a planet in close solar orbit acquire the same kind of topography as a moon revolving around a planet? Perhaps the answer lies in the Electric Universe concept of planetary formation.

The conventional theory of planet birthing is bound up with the so-called Nebular Hypothesis. A vast cloud of interstellar dust and gas is thought to slowly draw itself together because some stimulus, such as the shockwave from a supernova, initiates gravitational eddies that cause the nebular particles to attract one another. Over time, the particles form clumps that combine, becoming larger and larger. Eventually, the clumps form a spinning “accretion disk” that concentrates matter into a central ball. That ball grows so dense that its gravity crushes hydrogen into a confined thermonuclear reaction, forming a new star.

After the star ignites, there is supposed to be a large amount of dust left circling around it. The new star’s gravity then causes whirlpool like structures in the dust, which begin collecting material into dense aggregations until they harden into rocky bodies.

The numerous problems inherent with the Nebular Hypothesis is not the subject of this paper. However, the one insurmountable problem of unbound clouds of gas coalescing into solid objects cannot be ignored. If gas density increases, then molecular collisions increase. If molecular collisions increase, then gas heats up. Hot gas in space tends to disperse, since there is no container in which to confine it. Therefore, a cloud of gas, in order to contract into a star, must remain cold to prevent dispersion. However, as it contracts it heats up, so it disperses. Around and around we go.

In an Electric Universe, stars are not “self actualized.” Filaments of electromagnetically confined plasma are drawn together over vast galactic distances with a force up to 39 orders of magnitude greater than gravity. Since the filaments are magnetically constrained, they do not combine because of magnetic field repulsion. Instead, the filaments, called Birkeland currents, twist around one another in an ever-tightening helix. As they spin and twist, they constrict plasma in the interstitial spaces between them, squeezing the plasma into a star. Stars are externally powered by Birkeland currents, so they are often found in strings throughout our galaxy.

Because stars are arc mode plasma phenomena, they do not have superdense cores where thermonuclear fusion fashions new elements out of hydrogen gas. Instead, fusion takes place at the surface of a star, forming heavier elements that then fall into their interiors. This function begins the process of planet formation.

Physicist and Electric Universe advocate Wal Thornhill argues: “It is far simpler and infinitely more efficient if planets are ‘born’ at intervals by the electrical ejection of charged material from the similarly charged interiors of larger bodies – gas giants from stars, and rocky planets from gas giants. We have circumstantial evidence for such a proposal in the binary stars found after a nova outburst. Also most of the rocky bodies in the solar system closely orbit a gas giant. Electrical ejection in a massive internal lightning flash answers the question of the source of the energy. It is not dispersive like an explosion. The electromagnetic pinch effect will produce a jet of matter, rather like a coronal mass ejection, only on a much grander scale. The result is a proto-planet plus a stream of gases and meteoric debris.”

As rocky bodies, like Mercury or the Moon, are ejected from larger, highly charged objects, they are bombarded with what can only be described as gigantic lightning discharges. The electric charges between the newly emergent planet or moon and its parent are not in equilibrium, so arcing takes place as they rapidly move away from each other. That is why so many celestial objects in the Solar System are seriously damaged. Craters, canyons, melted plains, scattered fields of scorched debris, and ionically deposited piles of finely divided dust tell the story of violent birth spasms, while providing evidence for a familial relationship.