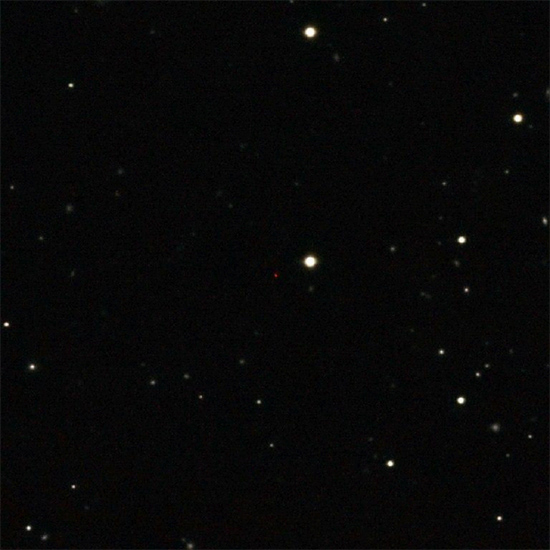 The Superlative Quasar (the red dot near center). Credit: ESO/UKIDSS/SDSS

If redshift (z) indicates distance, then astronomers have discovered the superlative object: the most distant, the most ancient, the most luminous, the most massive.

Analysis of the object’s spectrum shows that its lines have shifted toward the red by over 700% (z=7.1). The consensus opinion is that the object—a quasar—is therefore almost 13 billion light-years away. Since its light is presumed to have taken nearly 13 billion years to reach us, the quasar formed and became fully operational less than 800 million years after the widely publicized secular Genesis Event that most astronomers truly believe created both the universe and the coordinate system in which it is described.

To appear as bright as it does at that distance, it must be giving off about 60,000 billion times the output of the Sun. To get that much energy, 2 billion Suns must be crammed into a mathematical point called a black hole.

There can be no doubt that the presumptions are absolutely true—if you have no doubt about them. If you are one of the handful of infidels who still entertains doubts, if you haven’t undergone the institutional conditioning that reduces you to acquiescence in such opinions, you may find the beliefs fatuous.

These Pictures of the Day for the last seven years have reported the considerable evidence that contradicts the initial claim that redshift indicates distance.

If the quasar is not so far away, it’s not so big and bright and old. If redshift is intrinsic and indicates intrinsic age—age since the quasar formed—the quasar could be close, small, dim, and young. In this view, quasars appear to have a peak luminosity around z=1 and to be less luminous with increasing redshift. (See Quasars, Redshifts and Controversies by Halton Arp, p. 67-70.) That would indicate that this quasar is located within the Local Group of galaxies and perhaps is a recent ejection from the Milky Way.