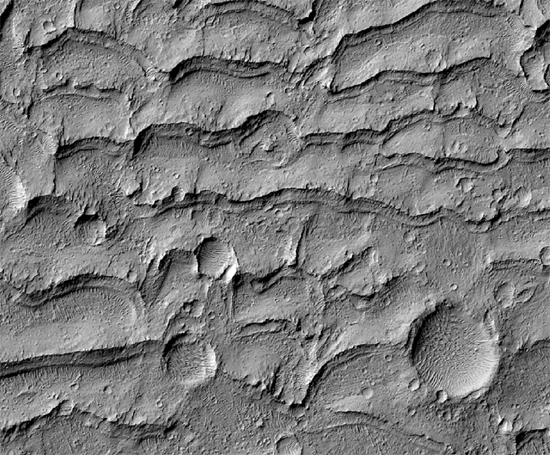 A portion of Medusae Fossae on Mars. Credit: NASA/JPL/University of Arizona

What carved these landforms?

Mars has been the subject of many previous Picture of the Day articles. Since its surface is preserved in a desert-like deep freeze, and appears devoid of water erosion, it is an excellent observational laboratory for Electric Universe concepts.

One of the points emphasized by those who advocate the Electric Universe theory, is that the Solar System was the scene of catastrophic events in the recent past that took the form of massive electric discharges and other plasma phenomena. Those events are postulated to have taken place between 5000 and 10,000 years ago. Whatever agency was responsible—dense clouds of plasma from interstellar space, extraordinary solar flares, or the close passage of another electrically charged celestial body or bodies—the result was devastation on a planetary scale.

According to a recent press release, the Medusae Fossae region on Mars is something of a puzzle for planetary scientists. An area approximately 1000 kilometers long by 400 kilometers at its widest point is so inundated with dust that there is no way for orbital instruments to derive a spectrogram. That means that no one knows what is under the dust. Since there is no way to know what it is, the speculation is that it might be layers of volcanic deposits, sediments from an ocean that vanished billions of years ago, or “compacted wind-blown soils”. Another possibility exists.

When electricity makes contact and snakes around a solid body, such as a planet, electric currents pull charged material from the surface where the arc touches down. Neutral dust and stones are pulled along with the ionized particles. Craters are most often circular because electromagnetic forces cause the arcs to maintain right angles to the impact zone. In Medusae Fossae, semicircular craters are cut into the sides of many large hills, with the other half of the circle a trench. How can an impactor from space form a trench while cleanly slicing a rocky mesa?

Since two or more filaments rotate around the arc axis, it can behave like a drill, excavating steep side walls and “pinching” a rolled rim. Often, the filaments will leave behind a central peak. Minerals in the crater will be electrically heated, scorched, and melted.

As Electric Universe proponent Wal Thornhill suggested, a positively charged surface will be melted, while the electromagnetic forces within the arc might lift the surface to form a “lightning blister,” called a fulgamite. Olympus Mons, for example, demonstrates the results of such a discharge: a gigantic mound with several overlapping craters at the top and a vertical drop off at its edge. There is also a “moat” surrounding Olympus Mons, as well as other mountainous formations.

If the surface is negatively charged, an arc will travel, sometimes eroding elongated craters, like the enigmatic “boot-shaped” crater recently discussed in a recent Picture of the Day. The arc might also jump from high point to high point. Smaller craters on the rims of larger ones point to this phenomenon. A series of craters in a line, otherwise called a “crater chain,” is another sign of arcing to a negatively charged substrate.

The advantage of the electrical interpretation is that it directly explains the nature of the topography dominating the surface of Mars. Electromagnetic forces between Birkeland currents constrained to a surface will force them into alignment. Ionic winds can lift pulverized rock and carry it along in the direction of the current flow. Where a discharge channel bifurcates, the branches tend to remain parallel to each other and may rejoin. Orthogonal coronal discharges from parallel Birkeland currents generate ripples of finely divided material.

It is most likely electrical effects that carved the craters on Mars and in so doing formed the drifts of finely pulverized debris that covers several thousand square kilometers in Medusae Fossae.