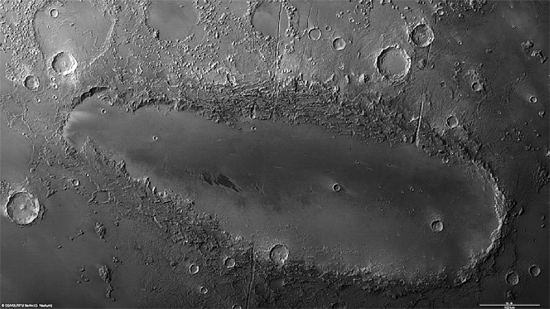 What formed this unusual structure on Mars?

Mars is the topic of a video from the Thunderbolts Project called The Lightning-Scarred Planet Mars. In it, Electric Universe advocate Dave Talbott explains how the Red Planet was probably the scene of tremendous plasma discharge events in the recent past. The various formations, as well as the overall topography, indicate something other than flowing water or blowing wind sculpted Mars.

Since erosion is a blurring and rounding process, the sharp peaks, steep valleys, and clean craters suggest that little erosion has taken place. If Mars once possessed a warmer, wetter environment in the past, then the layers of water-soluble olivine in vast deposits should not exist they should have dissolved eons ago.

In the image at the top of the page, a dry lake bed is one of the speculations for the strange shape of the “crater.” The Orcus Patera depression is approximately 380 kilometers long and 140 kilometers wide. Its rim is 1800 meters above the surrounding terrain, but its flat floor lies 600 meters below the surroundings. A lake bed would not have an upraised rim.

The presence of “graben” (rift-like valleys) that cut across its rim supposedly point to faulting from tectonic movement in the Red Planet’s crust. Volcanism has therefore been suggested as a possible source for the crater, as well as for the almost three-kilometer-wide graben found only on the rim and nearby.

Another poorly thought-out option is that a glancing blow from an asteroid scooped out the crater before its shallow attack angle sent it back into space. There are no ejecta anywhere near Orcus Patera, particularly outside of its long axis boundary, so where is the debris from the impact? Besides, the ability of an object to survive the energies involved with a high-velocity asteroid strike and then escape back to space is questionable.

Other elongated craters exist in the Solar System. There are several on the Moon, and others on Mars. They all share common characteristics: flat floors, steep walls, lack of impact ejecta, and a fresh appearance. If those criteria are applied to other structures, then Wilpena Pound in the Flinders Range near Adelaide, Australia could be part of that family.

Conventional viewpoints see the Flinders Range forming as sediments 650 million years ago in a now extinct ocean. Tectonic forces pushed the materials upward into a dome shape that has been subsequently worn down by wind and water. Over the millennia, the surrounding peaks have diminished and the hills and valleys have vanished into the dust and sand of the great desert.

As the standard theory goes, although Wilpena Pound appears to be the remains of a meteor impact, the overall shape and the stratigraphic composition do not support that idea. As has been pointed out in the past, erosion does not possess the all-encompassing power for change that modern geology asserts.

A lightning stroke is accompanied by transverse or “corona” discharges at right angles to the main channel. They appear to be “tributaries” joining the primary discharge, just like those connecting to the Orcus Patera depression. Surface lightning forces close tributaries to be parallel because of the electromagnetic force between them.

Lightning bolts orders of magnitude more powerful than anything seen today could have created the topography on the Sun’s family of planets and moons. As the Electric Universe theory explains, Mars has been subjected to electrical jolts that etched its surface with “skylights”, deep canyons with multiple side branches at right angles to the main channel, dry falls, terraces, and other features that can be found on Earth.

Due to their close resemblance to terrestrial physiography, the Martian formations are thought to be extremely old and cut by water millions of years ago. Electricity is never part of the equation when geological theories are presented. Failing to consider it, NASA scientists have missed a vital clue in the search for answers to the puzzles of planetary scarring.