Home Picture of the Day The Missing Matter is Missing

The Missing Matter is Missing 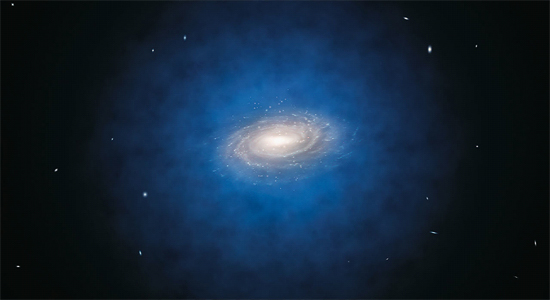 The missing matter that has to be there to account for the “fast” rotation of the Milky Way’s arms is missing.

Recent measurements of the velocities of stars within 13,000 light-years of the Sun have allowed astronomers to calculate the total mass of the matter in that volume. “‘The amount of mass that we derive matches very well with what we see—stars, dust and gas—in the region around the Sun,’ says [European Southern Observatory] team leader Christian Moni Bidin…. ‘But this leaves no room for the extra material—dark matter—that we were expecting.’”

As the press release states: “The blue halo of material surrounding the galaxy [shown above] indicates the expected distribution of the mysterious dark matter, which was first introduced by astronomers to explain the rotation properties of the galaxy and is now also an essential ingredient in current theories of the formation and evolution of galaxies. New measurements show that the amount of dark matter in a large region around the Sun is far smaller than predicted and have indicated that there is no significant dark matter at all in our neighbourhood.”

Most of the mass of the Milky Way (and of most spiral galaxies) is in the central bulge. If stars in the arms were revolving under the gravitational influence of what we see, they would slow down with distance from the center. Instead, the stars have fairly constant velocities. It’s called the “flat rotation curve.” (Astronomers can’t make up their minds whether to consider a galaxy a thing in itself, which rotates, or an assembly of stars, which revolve.) The accepted gravitational solution is to assert that there “must be” a halo of dark matter around the Milky Way placed “just so” as to cause the constant velocities. The dark matter is astronomers’ ideal substance: it projects only a gravitational force but not a trace of anything electromagnetic, so it can’t be seen. It’s anti-plasma!

Now the “must be” is colliding with the “what we see.” “‘Despite the new results, the Milky Way certainly rotates much faster than the visible matter alone can account for…. Our results contradict the currently accepted models.’” If astronomy were a science, “contradict” would mean “falsify,” and astronomers would start over. They would consider alternative hypotheses and other assumptions. But this would undermine textbooks, discredit papers, and jeopardize professorships.

The accepted model has many knobs that can be twiddled and components that can be swapped out. It’s better to get a grant to twiddle and to swap out: add a paragraph to the text, amend a paper, get a promotion. The model is not so much a theory of dark matter as a guarantee of job security. The dark condition of matter fits this dark age of science. The priests of orthodox astronomy copy ancient assumptions into new manuscripts illuminated with flourishes of excuse-making but devoid of groundbreaking thought.

One alternative from different assumptions—different from gravity—is the lab-based simulations of Anthony Peratt. He has shown that interacting Birkeland currents will rotate around each other at a constant velocity, trailing plasma behind them into spiral “arms.” More plasma will accumulate between them into a “bulge” that eventually swallows the currents. Is an interaction like this at the galactic scale the motive force of galactic rotation?

Analogy is not homology, as the biologists like to point out, but a scientific investigation of the matter would at least look into it.