Home Picture of the Day A Ring of Truth

A Ring of Truth 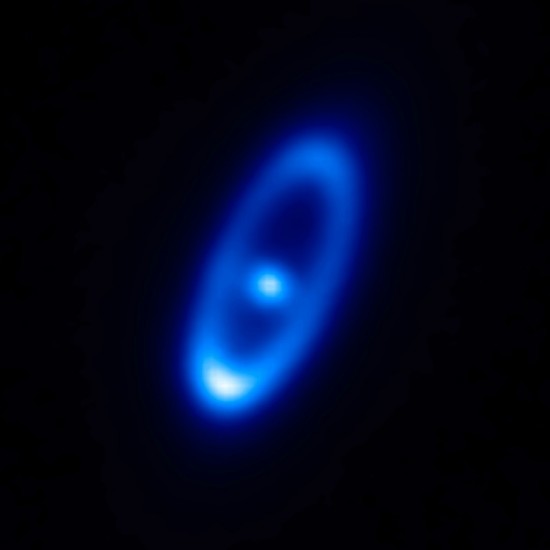 A recent press release from the European Space Agency announces that a ring around the star Fomalhaut (Fo-mal-HOUT) demonstrates “the glow from dust in the debris disc – a structure resembling the Kuiper Belt in the primordial Solar System – around the young star Fomalhaut. Detailed studies suggest that the dust in this debris disc consists of “fluffy” aggregates of grains, which are produced by the frequent collisions taking place between comets within the disc.”

“Combining both Herschel and Hubble data, we figured out that dust in Fomalhaut’s debris disc must behave like small grains in terms of emission and absorption, but it must scatter light like large grains do,” explains co-author Michiel Min from Utrecht University and the University of Amsterdam. “A form of dust that combines all these properties together consists of “fluffy” aggregates: large conglomerates of small dust grains with lots of empty space in the structure,” adds Min.

Astronomers believe that fluffy dust aggregates in the Solar System arise from collisions between comets, so they assume that the fluffy dust observed in the debris disc of Fomalhaut derives from cometary collisions, too. However, radiation pressure from the star should effectively blow such fluffy particles away: “this blow-out effect must be compensated by a steady production of dust particles via comet collisions,” notes co-author Carsten Dominik from the University of Amsterdam and Radboud Universiteit Nijmegen, which means the dust particles are being replenished by cometary impacts.

But this requires a phenomenal number of comets, “between 1011 and 1013, depending on their sizes” and an incredible rate of collisions between these widely separated bodies. “We estimate that the required amount of dust can be produced by an average rate of 2000 daily collisions between comets with a size of one kilometre across,” Dominik adds. It should also be noted that this requires faith in the hypothetical Oort cloud and Kuiper belt of comets, which must be disturbed by a passing star to provide the meager cometary display in our own Solar System.

The ring around Fomalhaut is 140 Astronomical Units (AU—the distance of Earth from the Sun) from the star. By comparison, Pluto is only 40 AU from the Sun. The disk is calculated to be 16 AU wide and about 2 AU thick. Distributing 1013 comets in this volume produces a density of one comet for each 1016 cubic kilometers of empty space. If the one-kilometer-diameter comets are represented by marbles one inch in diameter, the “marble comets” would be separated by about 4 miles. The chance of a collision is indistinguishable from zero.

At the distance of 140 AU, the comets’ orbital velocities will be miniscule, and they will all be orbiting in the same direction. Should any two approach each other on anything but a direct center-to-center path, their gravitational acceleration toward each other will increase their energies and serve to push them into wider orbits around each other, effectively preventing a collision. (For a similar interaction, consider the Moon around the Earth from a heliocentric point of view.)

Furthermore, these hypothetical structures are not restricted to a plane, so the ring should be diffuse and thick. However, an ESO report remarks that “both the inner and outer edges of the thin, dusty disc have very sharp edges.” “The ring is even more narrow and thinner than previously thought.” Shepherding planets were originally invoked, but this more recent finding has created ever more problems for theoreticians.

Once again, a desperate, ad hoc hypothesis involving collisions and unseen objects is invoked to explain excess radiant energy from a structure around a star. The EU model has a much simpler answer. Various ring structures, like supernova 1987A, are witness to cylindrical current sheets passing vertically through a thin equatorial disk of gas and dust. The cylindrical current sheet tends to form one or more particle beam “hot spots” around the ring, as plasma laboratory experiments reveal and the IBEX mission has recently discovered about our own Sun.

Rather than collisions from an unbelievable cloud of comets causing “fluffy” dust to reflect radiant energy from the star Fomalhaut, a dust ring is simply intercepting some of the electrical energy that powers the star, causing a glowing ring to appear.