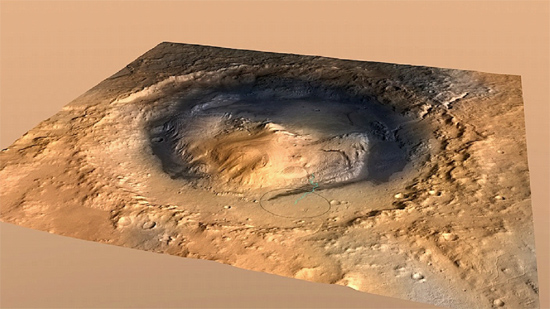 Planetary scientists admit that the central mound in Gale crater was not created by crustal rebound.

On November 6, 2011 NASA launched the Mars Science Laboratory rover, otherwise known as “Curiosity.” The new rover will touch down inside the 154 kilometer wide Gale crater on August 6, 2012.

There are several reasons for visiting Gale crater with a mobile science platform. The primary reason is the 5.5-kilometer-high layered mountain, Mount Sharp, named for the late geologist and member of several Mars mission teams, Robert Sharp. Secondary reasons are the many structures within Gale crater such as the “Grand Canyon” and the numerous cuts and grooves that areologists think provide evidence for sedimentary processes in the planet’s past.

Ever since the 1970s, when Viking 1 was launched on August 20, 1975 followed by Viking 2 a month later, planetary scientists have been looking for signs of life on Mars. Viking 1 landed in the western portion of Chryse Planitia, while Viking 2 landed 6700 kilometers away in Utopia Planitia. Both landers analyzed soil samples but found nothing conclusive.

Curiosity will explore Mount Sharp along one of two paths, analyzing soil samples with a variety of instruments. Each trail follows channels that meander down the mountain, presumably because they were formed by liquid water runoff at some time in the distant past. Mount Sharp itself is thought to be a collection of “wind-delivered sediments subsequently soaked by groundwater,” so mission specialists are hoping that it will provide the traces of biology that the Viking landers did not.

Previous Picture of the Day articles argue that if the environment on Mars was ever one of flowing water and a dense atmosphere, those conditions were completely altered by planet-wide electrical discharges in the recent past. Any open water or any possible life forms were disintegrated by catastrophic lightning bolts from a charged object in proximity to Mars. Whatever that object was, it also initiated underground currents of electricity, blasting out gigantic chasms in the Martian surface. The X-ray and gamma-ray emissions, let alone the thermal energy and explosive shockwaves, from such occurrences would be sufficient to irradiate any organism to the point of dissolution.

There are regions on Mars that indicate up to six kilometers of its strata was removed. Some of that material was probably blown into space or drawn up the vortices of enormous plasma filaments connecting the planet with some other electrical entity. A great deal of finely divided dust was deposited in other areas near the southern hemisphere, burying craters and piling up mountain-high ridges of hematite that cover thousands of square kilometers. The Mars Exploration Rover Opportunity has been rolling through such deposits for years.

Since those catastrophes were so all-consuming, it can be generally assumed that no life will be found on Mars.

The layering seen in Mount Sharp, as well as in Schiaparelli Basin, Utopia Planitia, and elsewhere is most likely due to ionic wind deposition and not to rainfall, flooding, or melting ice. Although the Mars Reconnaissance Orbiter (MRO) found what were said to be giant glaciers under mountainous piles of rocks and dirt near the Hellas Basin region, that data is open to other interpretations.

The MRO uses its radar to penetrate a few meters below the Martian surface to look for variations in reflectivity. The deeper the radar penetration before it bounces back, the less dense the intervening material. Radar signals matching a pre-loaded software configuration are not necessarily an indicator that the desired compounds were found. There could be factors on Mars that are so unlike those here on Earth that the radar could be acting in ways that were unanticipated. Ice may only appear to be the nearest match.

The history of the planets is difficult to determine. As these pages have attempted to point out over the years, each of the planets took part in several catastrophic events. NASA scientists often refer to what they find on Mars as “mysterious” or “puzzling,” with long years of research and contemplation ahead of them. We predict that the reason for the confusion is the problem of reverse application. Earth should not be used as a de facto model for other places in the Solar System.