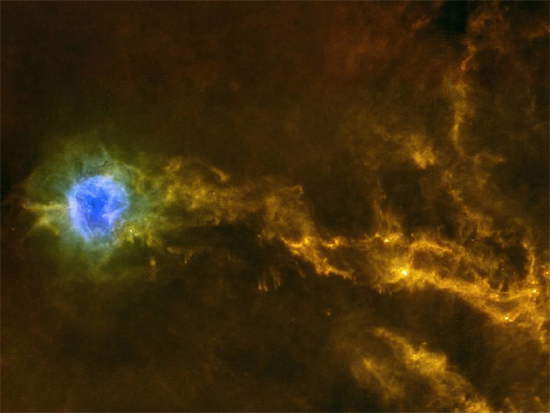 Infrared images of the “clouds” around the Cocoon Nebula reveal “networks of tangled gaseous filaments.” The filaments tend to have constant width and extend for many light-years. They appear to be stellar counterparts of the “stringy things” found in Venus’s tail. (We won’t mention the similar features in comet tails.) They puzzle astronomers because gravity and hot gas don’t do that. To add an enigma to the puzzle, “newborn stars are often found in the densest parts of them.”

If such a thing as “the vacuum of space” actually were to exist, hot gas would expand into it rather than get tangled. The vanishing small force of gravity tends to act with spherical symmetry, not with the linear complexity of twisting filaments. Astronomers have to say something to keep up the appearance of being knowledgeable in the face of such clear falsification of the theories they have come to believe in, so they speculate that “sonic booms from exploding stars” generate the filaments.

The gas, of course, is plasma, a word that’s not present in consensus astronomy’s lexicon. The filaments are Birkeland currents, identifiable by their coherence over large distances, their twisting about each other into cable structures, and their pinching into high-density “star-forming” instabilities. The networks are better known in plasma physics as circuits. The image above is a snapshot of a cosmic electrical discharge.

Since astronomers have no word for electricity, they have no way to explain what puzzles them: the concentration of fast-moving charged particles into long, thin channels. Their only recourse is to the superstition that preceded the investigation of electricity: thunder causes lightning.