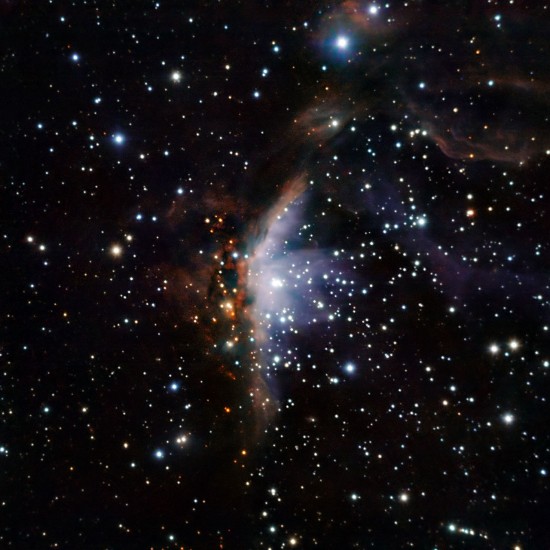 Australian astronomer Colin Stanley Gum compiled an extensive catalog of nebulae before his death in 1960. A Study of Diffuse Southern H-alpha Nebulae comprises 85 images that reveal intense activity within a variety of objects and structures embedded in them: extreme ultraviolet and X-ray emissions, blue-white supergiant stars, and regions of filamentation.

Star formation is supposed to take place according to theories originally proposed by Immanuel Kant and Pierre Simon Laplace in the Eighteenth Century. Scientists and science journalists persist in describing nebulae by invoking “blowing” dust, with “winds” created by “shock waves.” A nebula is said to be “star forming” when points of X-ray radiation supposedly indicate that new thermonuclear fusion reactions have begun within the cloud.

Consensus opinions suggest that shock waves from “stellar winds” generated by supernovae ram through star-forming regions, causing the wispy dust and gas to compress along the shock front. It is that initiator that “jump-starts” star formation, although how stellar winds “blow” through space until they encounter a nebular cloud is not known. Another problem associated with nebular star formation is that shock-heated gases should dissipate from the increased molecular movement, not collapse.

The Electric Star hypothesis resolves many “inexplicable” ideas that arise from a lack of knowledge about plasma and electric fields in space. Instead of kinetic effects, Gum 19 (and other nebulae) is powered by electricity. The electric power density in dusty plasma is greatest along the axes of Birkeland current filaments. The current produces an electromagnetic field that draws matter to the filaments from surrounding space more strongly and from a greater volume than is possible with gravity. When sufficient matter accumulates in the filaments they begin to glow. Stars are born along the filaments (like beads on a string) in those energetic displays of electricity.

Gravity is a profoundly weak a force when compared to an electric field’s influence on ionized particles. More massive stars, like the blue-white supergiants in the Gum nebula, are not necessarily more massive than our own Sun, they are radiating with more powerful electric discharges. A star’s size is not determined by gravity.

Since gravity is a weak force, for a gas cloud to collapse under its own weight it has to be cool and possess no magnetic fields, otherwise it would be driven toward dissipation. However, in the so-called “stellar nurseries” that have been observed, new stars are always embedded in chaotic regions of hot dust, energized plasma, and magnetic fields. It is only with an Electric Star theory that such dichotomies can be resolved.