Home Picture of the Day Bright Spots on Vesta 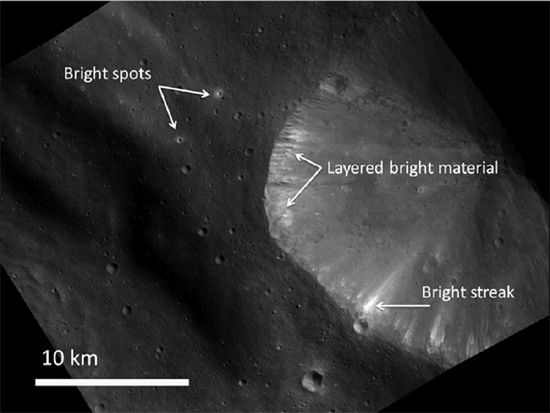 Are the bright crater rims and striations on Vesta the mark of discharge “vents”?

Are asteroids and comets close cousins in the Solar System’s family? Comets are usually called “dirty snowballs” in the scientific press, although missions like Giotto and Deep Impact observed them to be blackened, cratered, and fractured. There are no ice fields on Halley’s comet, and there is no reflective crust. In fact, when the Giotto spacecraft flew by Halley’s comet, mission specialists called it the blackest object they had ever seen. Highly energetic plumes blasted out from its dark, dense nucleus.

Deep Impact’s investigation of Comet Tempel 1 revealed an object that looked more like an asteroid than a chunk of loosely conglomerated dirty ice. There were large craters, scattered boulders, and cliffs, with no indication that a dirty snowball was slowly disintegrating. There was OH in the comet’s vicinity, which was interpreted as having come from broken-up water molecules on the comet nucleus, but there was so little ice on the surface that its origin was open to speculation.

In 2001, Deep Space 1 encountered comet Borrelly. To the astonishment of the mission team, it was a hot, dry desert-like body, not a cold chunk of ice. This conforms to the Electric Universe model of comets as planetary debris, born in catastrophic planetary electrical encounters.

When comets move through the radial electric field of the Solar System as they orbit the Sun, electrical stress on the nucleus causes them to emit visible plasma glow-mode discharges. In an Electric Universe, comets are electrically active, solid bodies.

Comets form plasma sheaths, called “comas,” often more than a million kilometers in diameter: it is not the passive sublimation of ice that creates them, they are formed around electrodes in a low-pressure-gas electric discharge. Plasma sheaths are regions of strong electric fields, which are capable of generating ultraviolet light and X-rays. Comet Hyakutake was a good example of that phenomenon. The cometary discharge also tends to concentrate into ”hot spots” on the comet nucleus, and ”cathode jets” emanate from those spots.

A previous Picture of the Day article discussed “Centaur objects” that revolve around the Sun near the asteroid belt. Centaurs exhibit characteristics of both comets and asteroids. 2060 Chiron, for example, displays a coma whenever it reaches perihelion, although it does not grow a tail. A coma was seen around 174P Echeclus in 2005, so it is also classified as a “cometary asteroid.” Many Centaurs are now known to behave like comets, except that they are so far from the Sun that its radiant heat cannot sublimate ice.

As has been written in past Pictures of the Day about Vesta, topographic data indicates an object that has undergone a catastrophic resurfacing. Punctures, gouges, and fractures dominate its terrain. On an asteroid 500 kilometers in diameter are craters 50 kilometers wide, with a 375 kilometer “impact basin” in the southern polar region.

The latest images from the Dawn spacecraft show several areas where bright material seems to have vented from Vesta’s surface. Since discharges and arcs form the comet phenomena, and exposing asteroids to intense electric fields can elicit plasma ejections, perhaps the areas on Vesta are where electrical connections were once made between it and its parent or other bodies in the solar system.