Home Picture of the Day Fair Daughter of the Dawn

Fair Daughter of the Dawn 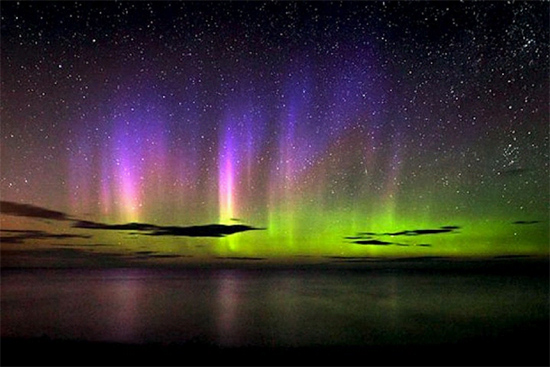 An electrically active magnetotail (or plasma tail) extends for millions of kilometers from Earth. Charged particles from the Sun, otherwise known as the solar wind, together with ions generated by the Earth, gather in a plasma sheet inside the magnetotail. Earth’s magnetic field causes these particles to spiral around the poles as well as to bounce between them. Some ions circle the Earth in two bands at low latitudes. Electrons move in one direction and protons in the opposite direction.

Solar ions flowing down into the polar cusps excite atmospheric molecules. Red light is emitted from oxygen molecules at high altitudes, while green light shines from oxygen in the lower atmosphere. Auroral blue comes from nitrogen.

Electromagnetic disturbances accompany bright aurorae because electric charge flows parallel to the auroral formation. Since electricity must move in a circuit, the electric currents travel into the aurorae from space and then back out to space, magnetically guided along the auroral arcs.

As mentioned in a previous Picture of the day, a magnetometer launched in 1973 by the U.S. Navy onboard the Triad satellite found two electric current sheets above Earth’s ionosphere charged with more than a million amperes. One plasma sheet descended from the aurora’s morning side and the other ascended from the evening side.

Kristian Birkeland’s research at the beginning of the twentieth century predicted the connection between Earth and space, so the plasma sheets are known as “Birkeland currents.” Birkeland’s polar electric currents are linked with electric currents moving within the geomagnetic field into and away from the Arctic and Antarctic regions.

On March 7, 2012 the Sun unleashed the second largest solar flare recorded in this active cycle. The X5.4 flare released a gigantic coronal mass ejection that headed for Earth at hundreds of kilometers per second. A geomagnetic storm occurred on March 8, increasing the auroral brightness and extending its visibility as far south as the Great Lakes.

As mentioned in past articles, auroral brightness and frequency tend to increase when CMEs meet Earth’s magnetic field, so logic would assume that the solar discharges are a flow of ionic particles. Heliophysicists tend to refer to those ions as a “wind” that “rain downs” on Earth. However, the fact that they follow the polar magnetic field establishes their electrical nature.

Solar flares are sometimes observed to leave the Sun with rapid acceleration. One CME burst was clocked at a velocity greater than 70,000 kilometers per second. A confirmation of the Electric Universe theory in that measurement was that material continued to accelerate as it left the Sun. Shock waves and “acoustic wave guides” could not have been responsible, otherwise the blast would have decelerated as it rushed toward Earth. Since the opposite effect was seen, an electric field phenomenon must have been at work and not kinetic effects.