When is a Flood not a Flood 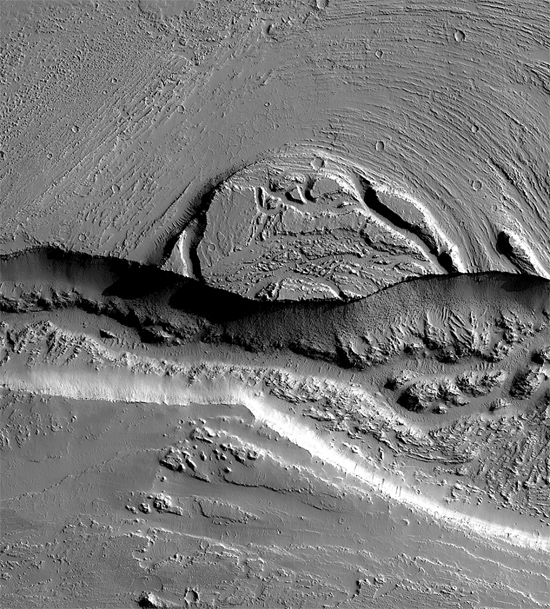 Water is said to have carved many of the features on Mars.

Scientists from the University of California reported in June 2007 that a “confirmation” for the Martian liquid ocean theory was found: “shorelines” extending for thousands of kilometers around a large lake that existed a little over three billion years ago. It is speculated that the “liquid oceans” have been gone for over two billion years.

Planetary scientists have correlated deep canyons, ripples, and other structures on Mars with floods of water flowing on the surface, eroding it in the same way as water is supposed to erode features on Earth. A theory supporting oceans of water on Mars millions of years ago seems to be contradicted by mineralogical evidence, such as deposits that would be destroyed by water. The flowing water hypothesis continues to guide consensus theories, however.

According to a recent press release, some researchers are beginning to move away from water as the active agent in creating channels like the one shown in the image at the top of the page. Instead, lava flows are thought to play a more significant role than previously considered.

As David Leverington from Texas Tech University wrote: “This paper highlights the strengths and weaknesses of the two theories that these outflow channels were formed by volcanic or water activity. Many scientists realize there are issues with aqueous interpretations of these channels. They recognize that if these systems formed by giant subsurface flows of water, there would need to have been extraordinarily high ground permeability, up to a million or more times greater than what we’d expect for the crust of the Earth, just to allow sufficient amounts of water to make it to the outflow locations and erupt to the surface.”

The prevailing view of Mars is that it is covered with a layer of ice. The soil temperature has been measured to be about minus 50 Celsius; so cold that carbon dioxide freezes solid. If water exists, it has to be locked in icy soils or in underground vaults, since the low-density atmosphere would cause water-ice out in the open to sublime to its vapor phase.

Several Mars missions were sent to confirm the water hypothesis. Clouds and low-lying fog were reported, and the Phoenix lander is reputed to have detected water just below the surface, although there has been no result that can stand up to close scrutiny.

Despite what was called “visual evidence,” the devices used to test for water returned a null reading. The soil around Phoenix was nonconductive, indicating no water. Phoenix froze to death when it was encased by almost 3 meters of frozen carbon dioxide during the Martian winter, so it is probable that it was dry ice providing the visual clue rather than water-ice.

Martian areography bears witness to violent events in the Red Planet’s past. Many images taken by the Mars Reconnaissance Orbiter (MRO) indicate that Mars was once the scene of devastating plasma discharges that, among other effects, ripped out the northern terrain to a depth of six kilometers below the planet’s mean elevation.

Burned craters and piles of scorched dust lead to the conclusion that lightning thousands or millions of times more energetic than we know today resurfaced Mars. The existence of these formations constitutes a confirmation of the Electric Universe hypothesis. Valles Marineris, Olympus Mons, the terraced mounds in Arabia Terra, as well as both Martian poles demonstrate strong support for the electric discharge theory.

It is possible that there are ice deposits on Mars formed during the catastrophic events that altered its surface. The aforementioned plasma discharges left behind sinuous rilles, flat-floored craters, “railroad track” patterns in canyons, intersecting gullies, and giant mesas with Lichtenberg “whiskers.”

Lightning of sufficient power can compress material in the discharge channel and accelerate it along with the negative charge, forming a jet. If the jet contains water vapor, liquid water or even ice might form inside the spinning Birkeland filament due to z-pinch effects.

If this phenomenon were to be scaled up to planetary dimensions, the increased electric discharges might have dumped quantities of ice particles onto the surface that clumped together into the frozen piles of debris that MRO’s imagers allegedly detected.

The fact that areologists are thinking about lava instead of water is a step toward an understanding of catastrophic evolution on Mars. If what we find on Mars took place in the presence of planetary lightning bolts and was not the result of ice or water moving across the surface, should we rethink our ideas about similar observations here on Earth?