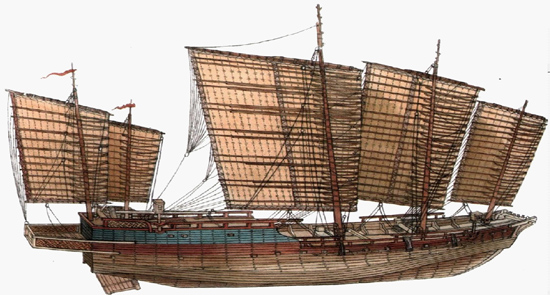 The Australian Bunurong tribe recorded the catastrophic formation of Melbourne’s Port Phillip Bay in their mythology.

“Plenty long ago, you could walk dry foot from our side of the bay to Corio. Then, in a night of destruction, great tornadoes uprooted all the trees and giant seas rushed in through the headlands. The land sunk under shattering earthquakes and the seas became void and deep, just as they are today.” Georgiana McCrae

When did these events occur? In 1450 AD, the catastrophic comet Mahuika descended upon the coast of New Zealand. Reputed to be twenty-six times as bright as the Sun, it discharged electrically and shattered Admiral Zhou Man’s Chinese fleet of some sixty ships. The fleet supported a thriving Chinese colony of Han, Tang and Song, mining gold, jade and antimony in New Zealand. The comet’s screaming noise blew out the sailors’ eardrums; they received horrific burns.

Earthquakes and gigantic waves that could have been more than 200 metres high tossed the ships upside down like matchsticks, whilst the intense heat caused the masts and rigging to catch fire. Zhou Man’s wrecked hulks hurtled across the seas to New Zealand and southeast Australia fanned by 600 kilometre per hour winds. Junks were flung ashore at Bairnsdale, Warrnambool, King Island, Kangaroo Island and even the tip of West Australia. Sound incredible?

These facts are recorded in the meticulous fifteenth century records of Chinese ambassador Zheng He. Historian Gavin Menzies claims that over nine hundred ships failed to return to China from Pacific expeditions in that tragic year.

Professor Ted Bryant recounts how matching Maori South Island mythology speaks of the Fires of Tamatea. They describe “the falling of the skies, raging winds and massive and mysterious fires and storms from space.” The catastrophe was centred on Tananui (Maori for “the big explosion”) where the airburst flattened trees within a radius of 80 kilometres. Vast forests caught fire. The Chinese colonists were burned alive. Flocks of the flightless Moa bird were incinerated and became extinct. Manu Whakatan translates as “the bird felled by a strange fire.” Local names describe the fireball: names such as, “Waitepeka,” “Kaka Point” and “Oweka” (Ka is Maori for “fire”).

A deluge followed the fire. The Invercargill plains, including the Chinese mine shafts, were flooded. Trees were toppled by the mega-tsunami. Maori place names inland reflect this: “Tainui,” “Tairoa,” “Paretai” (Tai being Maori for “waves”). Zheng He’s records and the Maori mythology agree.

Aboriginal myths from Port Phillip Bay, Newcastle, and Wilcannia on the southeast coast of Australia also describe falling debris, cataclysmic floods, earthquakes and heavenly auroral fires. Physical evidence of wrecked junks was discovered by marine engineer Cedric Bell, who investigated the hypothesis of a fifteenth century tsunami. Bell surveyed the coast of New Zealand’s South Island. Magnetic instruments showed 44 large junks buried in the sand or amongst inland chevrons. One treasure ship was impaled in a cliff at Moorak. Two burning junks were hurled into the cliff face at Wakanui Beach, their wreckage buried deep beneath a tsunami formation enclosing a stone-built Chinese canal.

Turning to Port Phillip Bay, there is abundant evidence for a destructive mega-tsunami. Layers of burnt cliff top and shells stretch endlessly around Port Phillip Bay and the Victorian coastline. Burnt trees protrude along the shorelines. Chevrons (20-30 metre high sand incursions) invade the coastline along Wilson’s Promontory, Portsea, Warrnambool and beyond. The sand chevrons are solid evidence for tsunamis washing inland for many kilometres. Carbon dating of the burnt shell remains appears to validate the fifteenth century catastrophe.

Conventional geology insists on a slow creation of Port Phillip Bay in a post ice age (Pleistocene) event occurring some ten thousand years ago. However, recent research from the University of Melbourne confirms this formation occurred within the last thousand years. This was a catastrophic event.