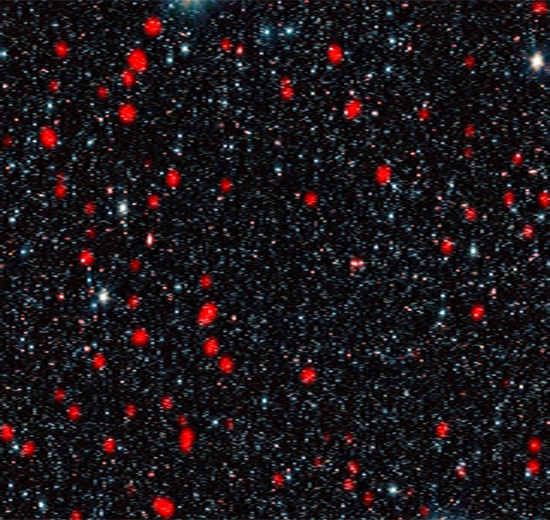 There was not then and there has not been since any discussion of the difficulties for consensus theories that Arp’s observations revealed.

In the image above, “[t]he LABOCA camera on the ESO-operated 12-metre Atacama Pathfinder Experiment (APEX) telescope reveals distant galaxies undergoing the most intense type of star formation activity known, called a starburst. This image reveals these distant galaxies, found in a region of sky known as the Extended Chandra Deep Field South, in the constellation of Fornax (The Furnace). The galaxies seen by LABOCA are shown in red, overlaid on an infrared view of the region as seen by the IRAC camera on the Spitzer Space Telescope.”

A recent press release perpetuates the willful ignorance of modern ossified astronomy: “[A] team of astronomers has found the strongest link so far between the most powerful bursts of star formation in the early Universe, [sic] and the most massive galaxies found today.”

The finding is “the way that bright, distant galaxies are gathered together in groups or clusters.” Where they looked to find this is the Chandra Deep Field South. Where is that? It’s ten degrees northeast of Fornax A, at the end of the line of clusters, quasars, BL Lacs, radio galaxies, and x-ray sources that Arp plotted in the figures 6-16 and 6-18. The “bright” and the “distant” in the finding are not in the sky but in astronomers’ presumptions.

Later in the press release, the cluster galaxies are called “starburst” (because they are blue and immersed in x-ray radiation) and noted to be “clustered in a very similar way to quasars.” No surprise there: They are part of the same clustering as the quasars. And the BL Lacs. And the radio galaxies. And the x-ray sources. Obviously (everything is obvious once you understand it and imperceptible until you do), the various objects have been ejected from Fornax A.

The “strongest link”—later called a “clear link”—between the alleged early galaxies and today’s massive galaxies turns out to be a computer simulation based on…presumptions about dark matter. Of course, astronomers can’t call them presumptions—that would be uncomfortably close to recognizing their willful ignorance. So they call it “measuring the masses of the dark matter halos around the galaxies,” thereby making a calculation based on a presumption spawned by denial of discrepant observations seem empirical. The “link” is no connection at all beyond that of wishful belief.

The consensus purblindness is obvious, embarrassing, and shameful. Since most of modern astronomy is funded by public monies and sold to the public as science, the enterprise is fraudulent. Fourteen years after Arp saw red, the outrage continues.