Home Picture of the Day A Solar Siesta 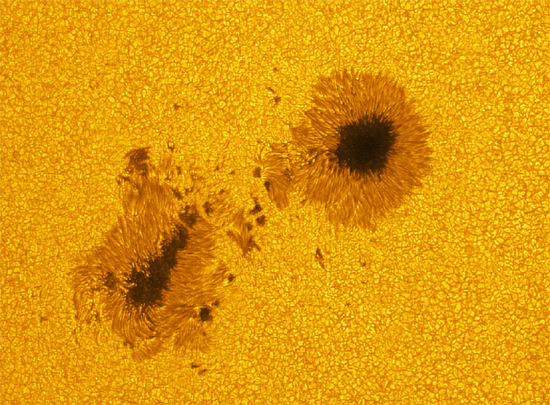 The Sun is predicted to “hibernate” during its next cycle in 2020.

A recent press release states that the Sun’s activity will slow to an unprecedented decline in the next ten years. The prediction is based on “…three independent studies of the sun’s insides, surface, and upper atmosphere…” According to the article, the drop in output could initiate climate effects comparable to the Maunder Minimum between 1645 and 1715.

Predictions about how the Sun will behave are reliable only if the interpretation of the data upon which the prediction was made is reliable. As many past Picture of the Day expositions have revealed, however, conventional theories of solar dynamics leave much to be desired. For example, attributing to internal heating the unexpected “weather patterns” recently discovered below the photosphere is like ascribing Earth’s weather patterns to heat escaping from within the Earth. The possibility that weather systems may be externally electrically powered has not occurred to investigators.

The Electric Universe theory proposes that stars are primarily electrical phenomena and not strictly based on gravitational compression somehow balanced by internal thermonuclear energy. Stars are electromagnetic in nature, responding to the laws of plasma physics and electric circuits and not those of gas dynamics or electrostatics.

This alternative view applies to the Sun, as well as to all other stars that populate the Universe: celestial bodies exist in conducting cosmic plasma and are connected by electric circuits. The Sun is “plugged-in” to a galactic power source and behaves like an electric motor and electric light. The faster rotation of the solar equator is prima facie evidence of an external force acting to offset the momentum loss of the solar wind.

Electric stars are not born from cold nebular clouds. Rather, their genesis resides in the electric currents induced in moving plasma. The electric currents induce their own encircling magnetic field, which “pinches” the currents to flow in filaments. Photographs of plasma in the laboratory show those currents forming twisted filament pairs called “Birkeland currents.” Birkeland currents follow magnetic field lines, drawing ionized gas and dust from their surroundings and then “pinching” it into heated blobs called plasmoids.

As the so-called “z-pinch” effect increases, it strengthens the magnetic field, further increasing the z-pinch. The resulting plasmoids form spinning electrical discharges that glow first as red stars, then “switch discharge modes” into yellow stars, some intensifying into brilliant ultraviolet arcs, driven externally by the Birkeland currents that created them.

Since this view of the Sun is at great variance with the conventional view, the mainstream “predictions” concerning solar activity should probably be taken with a grain of salt.