Home Picture of the Day Rainy Days on Saturn 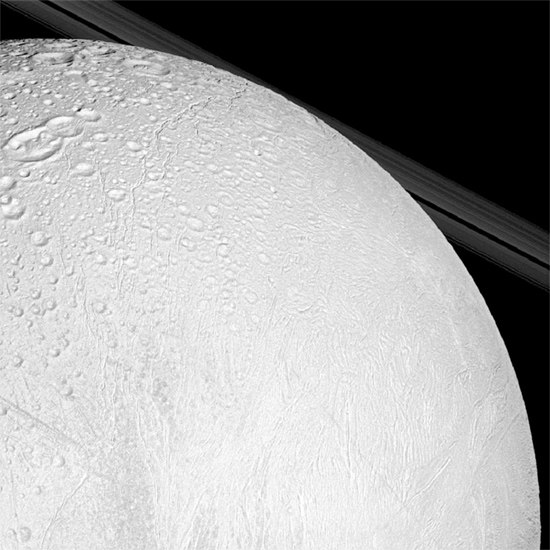 Water vapor in the gas giant’s clouds comes from a local source.

According to a recent press release the European Space Agency’s Herschel space observatory has detected a torus of water vapor around Saturn. The newly discovered ring is extremely diffuse and invisible to optical telescopes, requiring Herschel’s infrared sensors to see it.

The total width of the water vapor ring is about 603,000 kilometers, but its thickness is scarcely one-tenth of that. It appears that the comet-like jets emanating from the south pole of Saturn’s tiny moon Enceladus are constantly replenishing the water supply while it orbits the giant planet. As the ESA report states, Enceladus “…is showering rain water onto its home planet.”

This is not the first time a hitherto unseen ring around Saturn required infrared vision to find. The Spitzer Space Telescope discovered a new ring in a retrograde orbit, tilted off the main ring plane by 27 degrees. It is much larger than the ring found by Herschel: 2 million kilometers wide and 2.5 million kilometers from top to bottom.

The Cassini spacecraft’s observations of Enceladus reveal charged vapor plumes erupting from the south pole that follow magnetic fields. Enceladus orbits inside Saturn’s magnetosphere, so the moon acts like a generator: conducting plasma moving through Saturn’s magnetic field induces current flow. This fact was confirmed when Cassini observed the electromagnetic “footprint” of Enceladus in Saturn’s polar aurora. Of greater interest was a note of the time-variable correspondence between emissions from the moon’s polar discharge points and the auroral footprint’s brightness.

The “tiger stripes” on Enceladus are constantly referred to as “steam vents,” both in scholarly journals and in science blogs. They are said to “channel water to the surface” in the same way a terrestrial geyser might: heating water in a constricted tube until it overcomes the resistance to steam pressure.

It is widely presumed by astrophysicists that the Universe is electrically neutral, so when electrically active plasma is found in space, or on other rocky bodies, it is glossed over. Localized phenomena no matter how improbable are invoked: tidal “kneading,” “cryo-vulcanism,” and “geysers” erupting from underground chambers of liquid water are given as the cause for activity seen on Enceladus, while electricity is ignored.

The vents on Enceladus are scars caused by traveling electric arcs. They are similar to the “sinuous rilles” seen on Jupiter’s moon Europa. They are often found in parallel, cutting across other channels as if they were not there. Such characteristics contradict the idea that they are fractures or “strike-slip faults.”

For Enceladus to gain the features that we observe today, it must have been gouged and torn, rather than cracked and broken. A white-hot torch seems to have carved the surface, disregarding the prior topography: a sure sign that an electric arc was the active agent. The tiger stripes show parallelism not because they are open cracks but because filamentary electric currents flowing across a surface tend to align and follow the ambient magnetic field direction.

As Electric Universe theory proposes, the rilles on Enceladus, as well as the anomalous heat flow from its poles, are due to electromagnetic induction. The water vapor traveling the circuits back and forth from Saturn is electrically “machined” from Enceladus.