Home Picture of the Day The Lake Victoria Cosmic Massacre 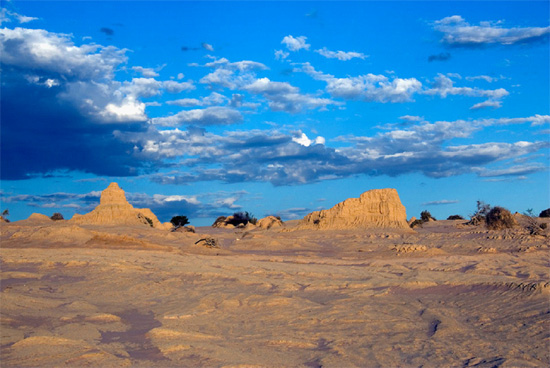 Is there a connection between Australia’s lunettes and Carolina’s oval bays?

Scattered around the shoreline and erratically buried in the sand dune lunettes of Lake Victoria lay an estimated 15,000 aboriginal bodies of uncertain age. Archaeologist Colin Pardoe believes they represent a communal burial ground stretching over some four thousand years. I think the real explanation lies in the mythology of the Bakanji tribe who inhabit the Murray Darling basin.

In nearby Wilcannia, Murray Butcher, talented aboriginal artist and keeper of this mythology, graphically re-enacted for me the tradition of a deadly falling star that slaughtered the Bakanji and flooded the land. Murray was unshakeable in his belief. It really happened, and not so long ago.

At Lake Victoria itself, early white settlers learnt of the terrible red ‘Sky God’ Nurelli, who ripped swathes through the trees and formed the huge, circular sand dune lunette with a fiery whirlwind. As I stood amongst acres of ruptured and scattered bones, I pictured in my mind’s eye the thunderous domination of Nurelli and imagined the dreadful screams of the fleeing hordes.

What does modern geology make of these incredible cliff faced, circular lunettes? To be blunt, they founder. In search of a more robust explanation, I visited Nuclear physicist Rick Firestone’s Cyclotron lab at the University of California, Berkeley. His unique isotope knowledge enabled him to decode these mysterious lunettes. In the U.S. they are called ‘Carolina Bays’ and Rick believes a catastrophic cosmic event created them.

The catastrophe caused the mass extinction of the mammoths and the wiping out of the Clovis Indian culture. Mammoths peppered with carbon and iron spherules, along with the insemination of iridium in Bay sites, provided the evidence. A comet, coronal mass ejection (CME), or a distant exploding nebula were amongst the possible culprits. The material within the Bays is distinct from the surrounding countryside.

There is a compelling parallel to the Carolina Bays near Mildura, in the Lake Victoria region. Is Rick Firestone’s cosmic event echoed in our own Aboriginal mythology? In the related lunette of Lake Mungo, ANU scientist Barbetti found evidence of a 20 degree magnetic reversal. The electric current necessary to produce this magnetic field reversal would have been devastating, equaling the power of many nuclear explosions. Cosmic electrical discharges may well explain the etching of the circular lunettes and bays.

Across Victoria, from Geelong to Colac, are more bowl-like depressions. However, there are problems with assigning a date to their formation. As Rick Firestone explained, these episodes are accompanied by huge influxes of isotopic carbon, which makes it nearly impossible to carbon date sites. The Aboriginal mythology cannot be that old. Does it parallel similar native American mythology of the recent past? It may take years to solve the mystery of the circular lake lunettes and the Carolina Bays.