Home Picture of the Day The Ornament Not Seen

The Ornament Not Seen 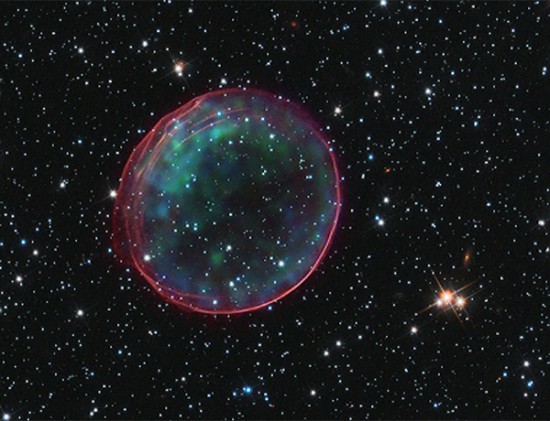 This image of the Christmas Ornament nebula in the Large Magellanic Cloud looks the same to Electric Universe and Gravity Universe proponents alike. Their radically contrary descriptions of what it is result from their ideas about what they don’t see.

Gravity Universe proponents describe a star that exhausted its thermonuclear fuel and exploded. It blasted its outer layers into a rarified interstellar gas, generating spherical shock waves that compressed and heated the gas to the extent of emitting x-rays. They call the nebula a supernova remnant.

Electric Universe proponents describe an hourglass-shaped z-pinch in a galactic Birkeland cable—a tubular configuration of current filaments rotating around an axis. Such a configuration is the “wiring harness” of all stars, which is usually invisible. In stars that are under heightened electrical stress, the plasma in the harness is pushed into glow mode and emits optical and x-ray light. Z-pinches viewed down the axis—as is this one—appear as rings. From the side, they appear as hourglasses, and from other angles they may appear as entangled circles or even as squares.

The red sheath around the outside of the cable, excited to emit optical light, appears as a ring. The brighter region at upper left is where the electrical stress is greatest. Significantly, a diocotron instability—the curlicue bend in the ring—is developing there.

The inner filaments, in which current carriers spiraling in the magnetic field emit x-ray synchrotron radiation, appear as the 26 x-ray “spots.” The number 26 is typical in electrical discharges in plasma—which is the Electric Universe description of stars. They tend to pair up—as seen especially in the “hot region” at upper left.

Another characteristic feature of such glow mode cables is the braided appearance of the ring currents. Also, the ring is actually two concentric rings but with only half of each emitting light—the outer one at upper left, the inner one at lower right. A similar configuration exists in the auroral circuit around Earth’s poles: the luminous half of each ring corresponds to current flowing in one direction; the dark half to current flowing in the other.

The important observation (for this essay) is what’s not seen. If explanations were limited to only what’s seen, they would make little sense. Sensation (data) gives only glimpses: a theoretical model composed of things not seen provides context, a bigger picture, that enables us to do things, or at least to do more things and new things. Mere facts tend to be merely confusing.

The sprockets of a theoretical model into which the cogs of facts can fit animate the machine. Because cogs and sprockets can be fit together in more than one way, we have the opportunity to see and to do new things. The choice of a model, then, as Karl Popper and many others since have claimed, is a decision directed by what we want to do.